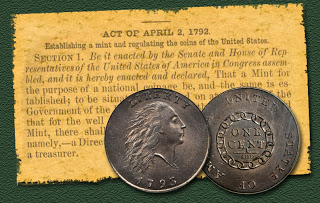 by Q. David Bowers
From the Desk of Q. David Bowers
Welcome to my current commentary. Among the many highlights of the Cardinal Educational Foundation Collection is a superb 1793 Chain AMERICA cent, variety Sheldon-2. Graded MS-65 BN by PCGS, this is either the finest or runner up to that position, per research done by Jeff Ambio (you’ll enjoy the detailed description when you see it in print!). This gem is a fitting companion to the memorable 1793 S-9 Wreath cent I discussed last week.

Mintage of federal coins began in July 1792 with the production of somewhat over 1,500 silver half dismes. These were struck in a Philadelphia shop, as the new Mint was not ready. On July 31, the first foundation stone was laid for the new Mint, for a structure that joined older buildings still in place. By September, beginning operations were underway, and in that autumn patterns were coined, mostly of the one-cent denomination.

In February of the next year the first cents were struck for circulation. The initial design had the name of our nation abbreviated as AMERI. It seems the engraver was fearful that the full spelling would not fit aesthetically on the coin. This proved to be easy enough to change, and the second pair of dies, S-2 as here, had UNITED STATES OF AMERICA. The copper cents of 1793 were placed into circulation without any particular fanfare. The art and science of numismatics had not yet developed in the United States, and while a few people may have kept examples as curiosities, there was no base of collectors. In contrast, across the Atlantic Ocean in Europe many people pursued coins, tokens and medals, some of them seeking pieces from America, a former colony. Because of this at least a few dozen cents of 1793 went into British cabinets. The present coin is among these—having been purchased in London from W.S. Lincoln & Son by Benjamin H. Collins. Various other 1793 cents have been repatriated in like manner, with the grades typically being EF or AU.

Otherwise, examples went into circulation, stayed there for many years, and became well worn. In 1859 when the American Numismatical Manual, by Montroville W. Dickeson was published, the author mentioned that in recent times cents dated back to 1793 could be found among circulated pieces, but were well worn.

Any 1793 copper cent is an object of numismatic desire no matter what the state of preservation. As I write these words I remember that in August 1958, fifty-four years ago, fellow teen-age dealer Ken Rendell (look him up on the Internet; he is a famous dealer in autographs and manuscripts now) and I were overnight guests of Dr. Charles Ruby his home in Southern California. He had dozens of 1793 cents—really and how impressive!—but nearly all were in lower grades, without a single example that came even close to the presently-offered coin. Years later his coins were sold by Superior Galleries.

Today, any 1793 Chain cent is an ultra rarity if in Gem grade. Considering all varieties there are only four certified at this level by PCGS. As high-grade early cents of all dates and varieties tend to be tightly held by their private owners, the word opportunity is most significant here.

The Cardinal Collection coin will attract attention far and wide as it crosses the auction block next January.