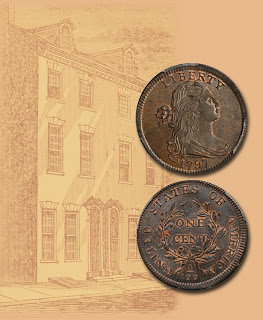 by John Salyer
United States Coin of the Week
Stack’s Bowers Galleries’ official auction of the November 2012 Whitman Coin & Collectibles Baltimore Expo promises to be one of the most exciting numismatic events of the year. We already have on hand several amazing consignments, with more arriving in our offices every day. Among the highlights already consigned to our eagerly anticipated Rarities Night event is an incredible, high grade 1797 Draped Bust large cent. The coin has been certified MS-65 BN by PCGS Secure and is an example of the Sheldon-138 die marriage.

Of amazing quality, this coin recently emerged from long and careful storage in Europe. The strike is bold throughout, with all of Liberty’s hair curls well defined; the cataloger also notes that all of the tiny leaves in the reverse wreath show nearly full veins. The surfaces are generally light tan in tone, with tinges of original mint luster in the protected areas, and no spots or signs of corrosion whatsoever. This is an early die state example struck before the reverse die began sinking, although multiple – there are almost too many to count – individual clash marks are noted on that side. The Gem condition makes these features unusually sharp and easy to discern. Handling marks are minimal, as expected for the assigned grade, and the coin is certainly high in the Condition Census for the S-138 variety. It is important to note that one of the five known Mint State examples is in the ANS collection, reducing the number of Condition Census coins available for private ownership.

The Sheldon-138 variety was not among those die varieties of early large cents found in the well-known Nichols Hoard, and Mint State coins had to survive by random chance. This new addition to the known population comes from a source that has yielded several great coins over the years, perhaps coins taken home by visitors to the early United States or by sailors whose ships were briefly docked in major American ports such as New York or Philadelphia. What would be a better memento for a contemporary traveler than a few coins from this upstart nation? Indeed, the coin’s desirability has only increased with the passage of time, and today it would serve as a centerpiece in the finest numismatic cabinet.