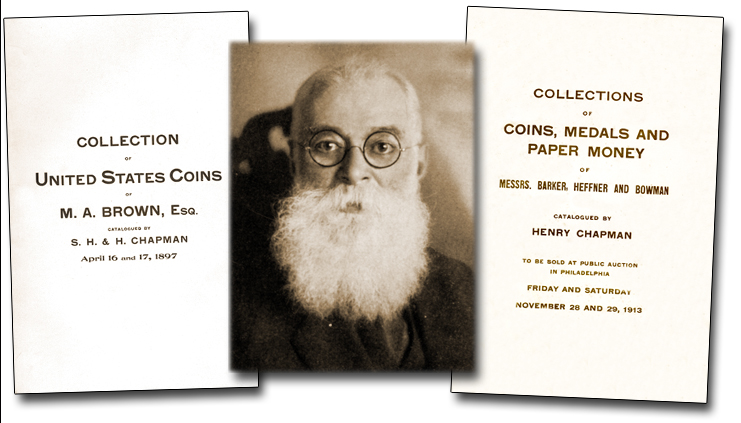 by Stack's Bowers Galleries
Answers for the Avid Collector
Question: I purchased an 1816 large cent, which came in a paper envelope that was marked “From Henry Chapman, 1916.” I have heard the Chapman name mentioned but would like more information.
–H.C.

Answer: Henry Chapman, born in Philadelphia in 1859, became interested in numismatics at an early age, and in 1876, along with his brother Samuel Hudson Chapman (born in 1857) became an employee at the Philadelphia coin shop of Captain John W. Haseltine. While there, the young Chapman brothers learned much about coins and had a chance to meet firsthand a number of Mint officials, apparently including some with whom Haseltine was conducting business on the sly.

In June 1878 the Chapman brothers hung out their own shingle, trading as numismatists and antiquaries. In those days it was unusual for a coin firm to deal in numismatic specimens alone. Coin prices were low, and to help meet expenses most dealers had many disciplines, including stamps, fossils, autographs and manuscripts, and even birds’ eggs. The Chapmans were no exception.

Aggressive businessmen from the start, the Chapmans pioneered the production of auction catalogs, which were a step above those of the competition, with the first number, for a sale held on October 9, 1879, illustrated with photographic plates — a highly unusual situation for the era. Jealousies were rampant in the coin trade, and as the Chapmans went from one accomplishment to another, professional animosity against them increased, reaching a peak in 1882 when the Chapmans snagged the Charles I. Bushnell Collection for auction, using it as a platform for detailed descriptions (replete with many editorial comments, many of which were accurate, but some of which were notoriously not so), and a special deluxe edition with photographic plates offered for $50 — which in 1993 terms would probably be like offering one for $250.
The more that the competition railed against them — one dealer actually printed on a monograph pointing out all the flaws in the Chapman’s cataloging — the more successful the Chapmans became. While dealers may have disliked them, collectors felt just the opposite — and collectors were the bread and butter of their business. The brothers’ success increased, and by 1906 they were both grand masters of the coin trade, having been in it for over 30 years and having seen many of their competitors pass away or retire. Apparently, the world was not ideal, for in this year the partnership broke up, after which Henry and S. Hudson went their separate ways, each to conduct their own illustrious sales. In his book, United States Numismatic Literature, Volume I, John Adams tells us that the older brother continued in the trade until retiring in 1929, while Henry kept at coins until his death in 1935.

Henry Chapman, of whom you wrote, was the better known of the two in the retail trade, and maintained an in-depth stock of United States coins in particular, but with many world coins as well. S. Hudson preferred to stick mainly to auctions. In 1907, when the MCMVII High Relief double eagle came on the scene, Henry Chapman stocked them and provided them to his customers. Ditto for the new 1916 Standing Liberty quarter in its day. In 1921 he went to the nearby Mint and bought 10 mirrorlike Proof Morgan dollars of the date, possibly constituting all that were ever struck with mirror finish. Several years after the death of Virgil M. Brand in 1926, Henry Chapman and St. Louis dealer B.G. Johnson were commissioned to inventory the Brand Estate, which largely occupied Chapman until his death. In the 1980s when we handled many coins from the Brand Estate for the Morgan Guaranty Trust Company and the heirs of Jane Brand Allen (daughter of Armin Brand, brother of Horace, one of two beneficiaries of the Brand Estate), the coins came in paper envelopes bearing many notations by Henry Chapman.

Your large cent was undoubtedly store stock sold by Chapman in 1916, at which time a dollar bill would buy several of this date!