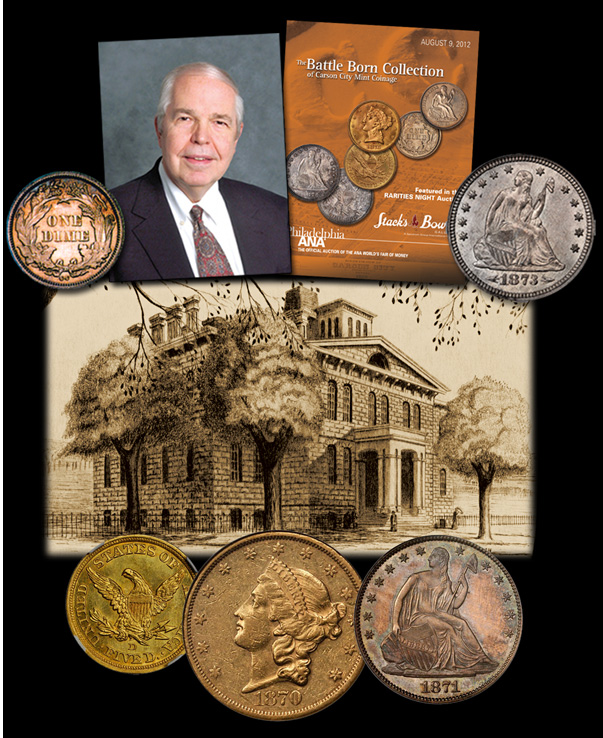 by Stack's Bowers Galleries
From the Desk of Q. David Bowers
I have been very blessed in my choice of career. As a young teenager, age 13, I discovered the world’s greatest hobby — coin collecting. At age 14 I began dealing part time in order to finance my collection. This grew into a sizable business, and after I took a degree from the Pennsylvania State University in 1960, buying and selling rare coins became my full time occupation. From the very beginning, continuing to today, I have enjoyed the experience. In fact, one of my favorite sayings is “I have never worked a day in my life.” Of course, I have worked, and a lot, but buying and selling coins, tokens, medals and paper money and interfacing with numismatists has been a joy.

Along the way the handling of some of the world’s greatest collections has been memorable. Indeed, the list of such is unsurpassed today. Among my favorites is the Battle Born Collection. You probably remember it. Showcased as part of our official auction at the American Numismatic Association’s World’s Fair of Money last August, this cabinet, in a separate catalog of its own, attracted worldwide attention. Offered was the only complete collection of Carson City coinage — from dimes to double eagles — ever presented in a single sale. The “complete” aspect was defined by the inclusion of the only known 1873-CC Liberty Seated dime without arrows at date, a marvelous coin in Gem Mint State, which had a long and illustrious pedigree. It was an old friend, so to speak, for in 1996 I had cataloged it as part of the Louis E. Eliasberg Collection.

Other rarities were featured as well, including the exceedingly rare 1873-CC quarter without arrows at date, the justifiably famous 1876-CC twenty-cent piece, and many condition rarities — pieces in Mint State that normally are only seen in circulated grades.

Our dealer colleague and friend, Rusty Goe, who operates Southgate Coins in Reno, Nevada, was the architect in the formation of the cabinet for a private buyer. Tirelessly, year after year he sought the rarest of the rare, the finest of the fine. At the same time he engaged in deep research concerning the Carson City Mint, its officers and activity. These were published in two memorable books, The Mint on Carson Street and James Crawford: Master of the Mint at Carson City. Today they are standard references.

The Carson City Mint was authorized by Congress in 1863, constructed in due course in the state capital, and opened for business in 1870. In that first year the first coins struck were Liberty Seated dollars. From then until 1885 silver and gold coins were minted in denominations including the dime, quarter, twenty cents, half dollar, silver dollar, trade dollar, half eagle, eagle, and double eagle. Nearly all of the precious metal came from the Comstock Lode about 15 miles away, centered in Virginia City. This treasure trove of ore was discovered in the late 1850s and soon exploited. Even those who are not familiar with numismatics probably know that Mark Twain was a writer for The Territorial Enterprise in Virginia City in the early days — before he achieved fame. This was a district of hard rock mining and fast living. Virginia City had facilities ranging from gambling halls and bordellos to huge mines. It became world famous.

It was only natural that a mint be proposed as the source of metal was so close. The nearest other mint was in San Francisco, distant on the Pacific Coast. However, politics intervened, certain interests in the federal government did not look upon Abram Curry, the superintendent, with favor. After all, Curry was a principal in the huge Gould & Curry Mine, and competitors were not favorably disposed. In addition, railroads adjusted their rates so that it was just as convenient to ship the metal to San Francisco as it was to haul it to Carson City. As a result, mintage quantities tended to be much lower than anticipated.

In 1886, coinage was suspended, and it was not known whether the mint would ever operate its presses again. Then in 1889 mintage commenced again, but lasted for just a short time until 1893. The presses were stilled and, in time, the equipment was removed. Beginning in 1941 the Carson City Mint building became the home of the Nevada State Museum, as it is today, with many beautiful displays.

In the meantime, in the numismatic scene from 1870 to 1893 there was hardly any interest in branch mint coins. Whether a C, D, O, S, or CC mintmark was present did not attract interest. Not even the Mint Cabinet, established at the Philadelphia Mint in 1838 and adding to its collection yearly since that time, bothered to save such pieces! Of course, this seems incredible today.

The situation changed, and dramatically, in 1893 when Augustus G. Heaton, a prominent artist, poet, numismatic writer and soon to be president of the American Numismatic Association, published his Treatise on Mint Marks. This listed 17 “Causes of Attractiveness” of branch mint coins. Readers learned in many instances that Philadelphia Mint coins could be common whereas those at certain branch mints could be great rarities and potentially valuable. Interest increased and over the next several generations, mintmarks became extremely important. Today in 2013 they are exceedingly so. The addition of the tiny CC mintmark on a coin can make a difference of over a million dollars — as in the case of the Battle Born 1873-CC No Arrows dime that we sold for $1,840,000.

As time went on the Carson City Mint rose to the top of numismatic attention and interest. While coins of the other mints were rare in many instances, the “Wild West” romance of Carson City, plus the general scarcity and rarity of the issues, made them favorites with collectors. Today they are prime specialties.

The Battle Born Collection, formed under the direction of Rusty Goe, as noted, will forever stand as unique in its combination of completeness and high quality. The Louis E. Eliasberg Collection had one of each variety (offered in different sales) as part of a larger collection, but in many instances the grades of the coins were far lower than those in the Battle Born Collection. Elsewhere, certain cabinets have had outstanding examples of scattered rarities and individual pieces, but never consistently high quality.

Making the Battle Born Collection catalog even more memorable is extensive historical information provided by Rusty Goe in particular, and added to by me. Jeff Ambio, professional numismatist in the California office, created the numismatic descriptions, which were also memorable. Rusty Goe also provided comprehensive pedigree lines for each coin in the collection, as well as “Statistical Snapshots” for each. His three pieces of front-matter in the catalog serve as a grand introduction to what follows. The result was an event that will always be remembered and a catalog that will always be treasured as a reference. Could anything be more ideal?