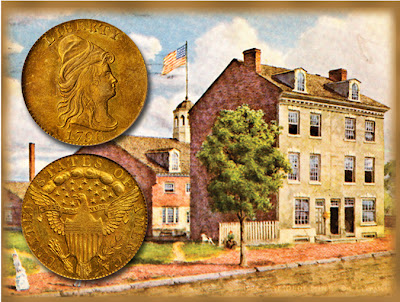 The annual ANA World’s Fair of Money Convention, being held this year in Philadelphia, provides one of the most exciting weeks of the year for numismatists. The Stack’s Bowers Galleries Official 2012 Philadelphia ANA Auction is proving to be one of the most highly anticipated of such events in recent memory. One of this year’s highlights will be the Werner Family Collection of 1796 Coinage. Of all the years of American coinage history, 1796 is one of the most important and the Werner Family Collection contains a selection of scarce and rare issues and is a truly memorable offering. One of the most important offerings from this venerable collection will be a 1796 No Stars Capped Bust Right Quarter Eagle, graded MS-61 by PCGS in an old green holder, and bearing a rare gold CAC sticker, which indicates that the coin exceeds CAC’s strict standards for the assigned grade!

All early quarter eagles are extremely rare in Mint State, and this piece is far and away finer than most others seen at the grade level. This satiny jewel was awarded the prized gold CAC sticker for its quality, a prize reserved for coins that appear to be undergraded. In presentation, the surfaces are a rich copper-gold with greenish accents in the fields and recesses. While the surfaces have minor handling marks, the fields retain a degree of reflectivity. This is most notable on the reverse, where the complex devices protected the fields from any contact, while the broad and open obverse fields were provided no protection by stars or lettering within the left or right sides. Reasonably sharp as the dies were able to bring up the curls of Liberty and all the tiny star centers and lettering well. Trace softness is noted at the center of the reverse, common to this variety, where the eagle’s upper breast and neck are not fully brought up, as this area is precisely opposite Liberty’s ear where the most gold had to flow to fill in the demands of the dies during the strike; apparently the coiner just didn’t have enough strength to bring these features to their ultimate conclusion. Furthermore, this is a later die state of the obverse, with thin die cracks down from the center of the L(IBERTY) into the cap, another from the right side of the E of that word to that crazy curl of hair, which wraps backwards up to the cap. No adjustment marks or handling marks of any great consequence are seen, and the visual impact of this treasure is a delight for the numismatic eye.

The first delivery of 1796 No Stars quarter eagles took place on September 21, 1796 of a mere 66 pieces, and these were almost certainly the exceedingly rare BD-1 variety, of which only four coins are known today. The reverse die broke, suspending coinage until a new die could be prepared. The next and final delivery of 1796 occurred on December 8, 1796 of 897 coins, and these were the No Stars BD-2 variety, offered here. Both the 1796 BD-1 and BD-2 quarter eagles were struck with the same obverse die, with the earliest die state seen on the BD-1 issue. The 1796 With Stars obverse BD-3 variety is believed to have been delivered on January 14, 1797 (432 pieces). These numbers seem to fit well enough with the number of survivors today, and considerable research confirms this scenario, although of course nothing is definitive and further research will likely discover new evidence that can be interpreted in new ways. What we certainly know today, is that all of these early quarter eagles are rare, with survival rates that are in the low single digits from the tiny original numbers struck, thus each surviving coin is a national treasure to be enjoyed and studied by any numismatist lucky enough to own one.

While certainly among the top 10 coins known of both the type and the date, this exciting No Stars quarter eagle may actually rank among the top five (!) survivors if all the high-grade examples could be gathered together and examined by experts. What is clear is that this is a very high-end coin for the grade assigned, and would be a welcome addition to the most advanced numismatic cabinet. One of the highlights of the fabulous Werner Family Collection, and a coin of exceptional beauty, quality, and rarity.