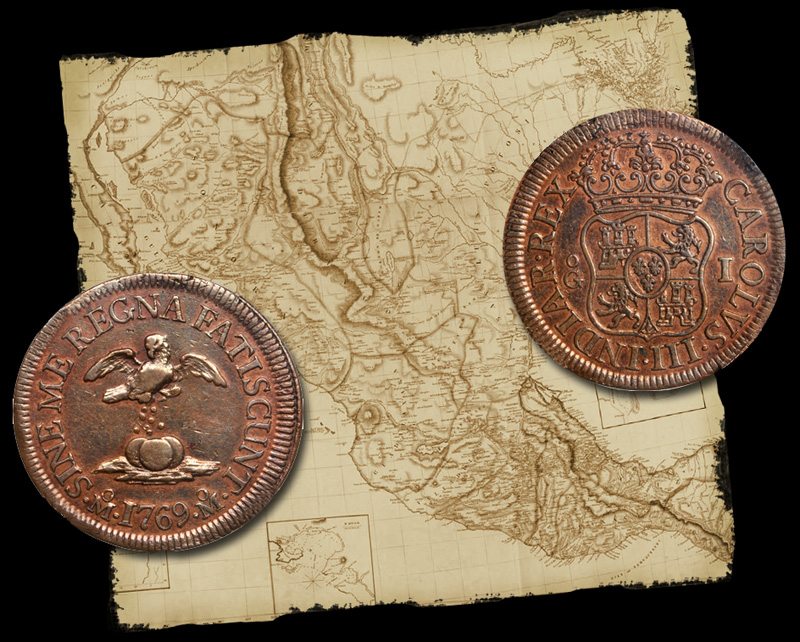 by Chris Chatigny and Kent Ponterio
Crossing the Block
This week’s highlight for the Stack’s Bowers and Ponterio August ANA World’s Fair of Money auction is an extremely rare and interesting Mexican coin. This coin is quite scarce and has yet to receive its due scholarly analysis. As it stands, even this coin’s denomination is up for debate, as is its status as to whether or not it is a pattern or circulation issue. Speculation surrounds this coinage, however some theories concerning this coin are sound. Despite any uncertainty as to the details behind the creation of this piece, its scarcity is indisputable and will most certainly create a high demand for this piece when it reaches the auction podium.

The iconography for this coin, in addition to its mysterious background, is very fascinating. The obverse could very well be the first coin to depict an eagle perched on top of a cactus, which would become the iconic image for independent Mexican coinage in later centuries. However, some assert that this bird is a dove of peace, spreading seeds into fertile ground (as an allegory for the Spanish spreading their influence throughout the known world). At the base of the cactus there are three globes, which could be attributed as a representation of the Spanish sphere of influence: they depict the Spanish Old World, Spanish New World, and the Spanish Orient (Philippines). The inscription bordering these images states: “SINE ME REGNA FATISCUNT” which means: “without me kingdoms totter” and finally there are two Mexico City mintmarks surrounding the date of 1769. The reverse showcases the proud Spanish Coat of Arms, including the castles and rampant lions of Castile and Leon and the pomegranate of Granada in the bottom. The triple fleur de lis is also present in the center. The regal crown surmounts the Bourbon escutcheon (heraldic shield), and the outer legend “CAROLVS. III. INDIAR. REX.” states Charles III’s royal title. Two symbols appear to either side of the heraldry, “Go” and “1” and possibly stand for its denomination.

This copper coin is most often referred to as a pattern by most traditional references, but as stated earlier this is a speculative analysis. The denomination of “Grano” is also assumed, as this denomination had never seen use in Mexico before. Grano is attributed as the denomination based on two symbols on either side of the Spanish Coat of Arms, “1” and “Go”, with Grano derived from the “Go” monogram. It is generally assumed however, that these were created as part of a rare and short lived issue intended for circulation in Mexico. One important piece of evidence in support of their intended circulation in Mexico is that all other Spanish Colonial pattern pieces from the Charles III era were issued directly from the Madrid Mint in Spain. This piece displays the Mexico City mintmark leading to the assumption that this particular coin was indeed intended for circulation and not a pattern type.

One possibility for its short lived nature is that Charles III hired Tomas Francisco Prieto to oversee all of the Spanish Colonial mints, in an attempt to unify the coinage in the Spanish Realm. At the Madrid Mint, Prieto designed a new portrait coinage for Charles III and distributed to the colonial mints full denomination sets of uniface patterns. These were dated 1770 and their authority in unifying the colonial coinage would supersede any potential of a newly issued copper coinage series. Some authors have even thrown the intended country of circulation into question by offering the idea that these pieces were minted in Mexico City (as expressed by the Mo monogram) but were intended for circulation in the Philippines. This theory states that these were patterns struck in Mexico City and sent to Spain for consideration as a circulating piece in the Spanish Orient (Philippines).

Look for this and other World numismatic rarities in our upcoming August ANA Sale. Preview this impressive coin along with the rest of our auction this August at the Stack’s Bowers and Ponterio office located in Irvine, California. For details please refer to the Auction Schedule/Details link under Current Auctions at www.StacksBowers.com. To schedule an appointment, please call 800.566.2580. While our Stack’s Bowers and Ponterio ANA World’s Fair of Money sale is closed for further consignments, we are currently taking consignments of world and ancient coins for our November Baltimore, January New York International, and April 2014 Hong Kong sales. If you are interested in consigning your coins and paper currency (whether a whole collection or a single rarity) be sure to contact one of our consignment directors.