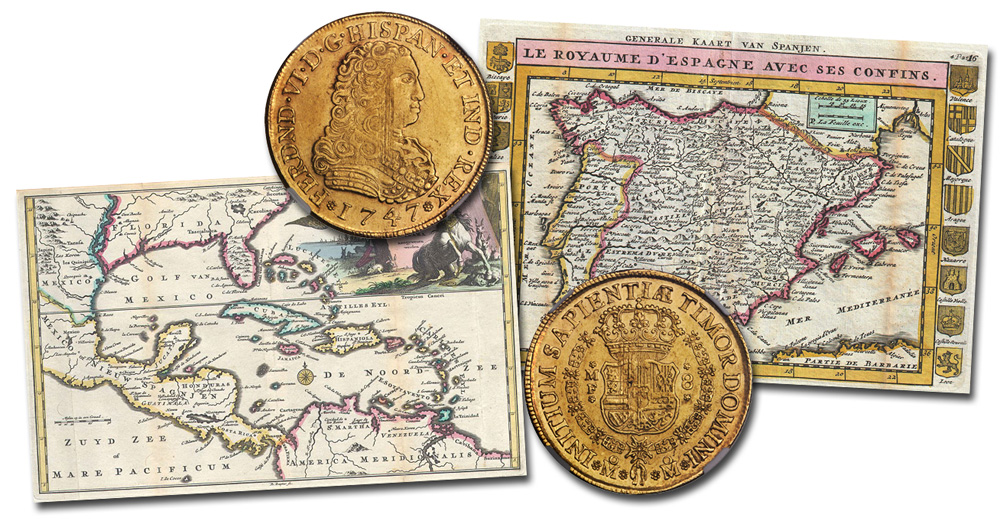 by Chris Chatigny
Crossing the Block
The August ANA World’s Fair of Money auction in Chicago is coalescing into a massive and impressive sale. One extraordinary coin to be offered is a rare 1747 Mexican 8 Escudos. At this time in history Mexico was a Spanish colony known as the “Viceroyalty of New Spain.” The Spanish monarch, Philip V, died in July of 1746, and his son Ferdinand VI succeeded him. One issue facing royal successions at that time was the sheer amount of travel required to spread the news of the new king’s ascension to the throne. It took many weeks to travel by ship from Spain to the New World. Before the news of Philip V’s demise had reached Mexico, the Mexico City mint had already begun issuing posthumous issues of Philip V in the early months of 1747. The official mint in Spain would need some time to create official punches with updated portraits, legends, and icons. In the meantime, after Mexico received word of Philip V’s death but before Ferdinand VI’s official portrait punches could be sent, the Mexico City mint improvised a design for Ferdinand VI.

With a verbal description of the new King Ferdinand VI of Spain, Mexican mint officials created an “imaginary portrait” for the obverse of this coin. Ferdinand VI’s royal titles appear around the bust: “FERDND. VI. D. G. HISPAN. ET IND. REX.” The date appears below the bust, flanked by two rosettes. A careful examination of the armor shown on this bust reveals it to be nearly identical to the armor of Philip V, the predecessor. In all likelihood it was simply copied over, in order to facilitate a speedy production of the new coinage. The bust itself, as mentioned above, is known as an “imaginary portraiture” and would not resemble the future official portrait punches of Ferdinand VI issued by the Madrid mint. This “imagined portraiture” was unique to the Mexico City mint, was only used for a brief span of a few months, and was never used at any of the other colonial mints outside of Mexico. These factors combine to create an extremely rare coin that was only produced in desperation for a short time. The reverse contains an intricate shield depicting the complex and stunning coat of arms of the King of Spain. The Crown appears above, and along either side of the shield appears the Order of the Golden Fleece, a famous Order that has existed for almost 600 years. Between the chain of the Order and the heraldic shield are displayed the assayer’s initials on the left and an “8” for 8 Escudos on the right. The inscription reads: “INITIUM SAPIENTIAE TIMOR DOMINI” which translates to “Beginning of Wisdom is Fear of the Lord.” This inscription was the official motto of Philip V. The reverse design is the same punch reused from the previous Philip V issue. At the very bottom, between the beginning and end of the legend and the Golden Fleece, are two “MO” monograms signifying the Mexico City mint. This rare type was only issued for a few months in the year 1747, and as such it is extremely rare. This piece has the distinction of being tied for the second finest graded with only one example finer. This coin is sure to be a centerpiece in the collection of its new owner.

Look for this and other World numismatic rarities in our upcoming August ANA Sale. Preview this impressive coin along with the rest of our auction this August at the Stack’s Bowers and Ponterio office located in Irvine, California. For details please refer to the Auction Schedule/Details link under Current Auctions at www.StacksBowers.com. To schedule an appointment, please call 800.566.2580. While our Stack’s Bowers and Ponterio ANA sale is closed for further consignments, we are currently taking consignments of world and ancient coins for our November Baltimore and New York International sales. If you are interested in consigning your coins and paper currency (whether a whole collection or a single rarity) be sure to contact one of our consignment directors.