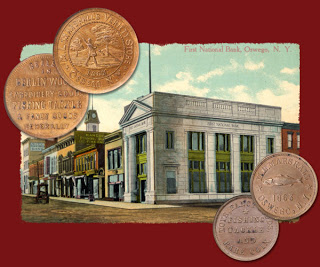 by Q. David Bowers
This and That
Among the more interesting collectible tokens and medals from the 19th century are those issued by dealers in old coins and paper money. There are dozens available, most of which are nicely delineated in Russell Rulau’s Standard Catalog of U.S. Tokens, Fourth Edition. Some of the best known were issued by Morgan L. Marshall, of Oswego, New York, from about 1860 to 1863, in several varieties of metals, and in two designs. Perhaps the most often encountered is the cent-sized Civil War token as shown here. Somewhat scarcer, but still affordable, is a larger medal, dated 1860, issued by Morgan’s Variety Store and showing a man fishing.
Morgan, whose nickname was “Blunt,” was born in 1822, in Oneida County, New York. He developed an interest in the outdoors and, in particular, fishing. His general store emphasized sports equipment, but stocked other dry goods as well.
For multiple terms he served as president of the Oswego Horticultural Club. He was important in the Oswego Leatherstocking Club, a group that was prominent in the suppression of illegal fishing and the taking of game.
His numismatic activities have been recorded but lightly, for he was active in an era before there were any regularly-issued publications in the hobby (this not happening until May 1866 with the advent of the American Journal of Numismatics). Most of what we know about him is from his two tokens. Both were struck in a variety of metals and sold to the numismatic trade.
W. Elliot Woodward’s sale of April 28 to May 1, 1863, offered as lots 1583 to 1586 a run of the 1860 medals in silver, copper, brass, and tin. Lot 2107 in Woodward’s October 1864 sale was described as,   “Marshall’s Variety Store, man fishing; silver, rare.”
More Woodward citations, these from his sale of October 1884:
Lot 1702: “Marshall, M.L. ‘Oswego, N.Y. 1860’; silver, Proof, size 18.”
Lot 1703: Copper Proof of same. Lot 1704: Pair of brass and tin impressions, very fine.
Lot 1706: “The same. 1863; ‘Rare Coin’; copper and brass, very fine, two pieces, size 13.”
Over the years the 1860 token and 1863 Civil War cent have been offered many times.
During the Civil War, Marshall helped raise money and spur enlistments in Oswego. On May 6, 1883, while at the Getman House in Theresa, New York, he died suddenly. His widow, a daughter of Ezra Dyer of Vernon, New York, survived him.
In The Numismatist, June 1904, George W. Rice contributed this:
“I was pleased to see that sketch of Mr. Marshall of Oswego, New York. That city was my birthplace, and although I left there in 1861, when quite a small boy, I remember Mr. Marshall distinctly. His store was headquarters for toys, sporting goods, fireworks, etc., and many an hour have I spent deciding on what I would buy when I got rich, while my father talked coins. In the fall of 1860 Mr. Marshall disposed of my father’s first collection of coins. I have Mr. Marshall’s catalogue showing a half dollar of 1804. My father had it checked and always claimed that he had the coin, and Mr. Marshall said it was genuine.”