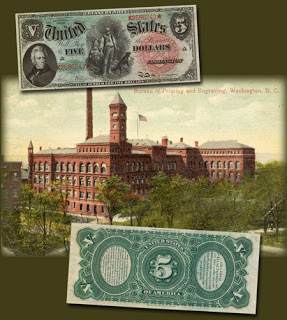 by Matt Quinn
Paper Money of the Week
Stack’s Bowers Galleries is proud to present the finest known 1869 five-dollar Rainbow note as a highlight of our upcoming auction in Baltimore, Maryland. The auction is the official auction of the Whitman Coin and Collectibles Expo, and is being held at the Baltimore Convention Center from March 20-24th.

This item sets a standard for all Rainbow notes to be weighed against in terms of appeal and grade. The 1869 Five Dollar legal tender offered here marks the census condition for all denominations within the famed "rainbow," series. PCGS has graded only a scant 10 1869 legal tenders at the Superb Gem New 67 level, at that level there are no one dollar notes, a single two-dollar example, six five-dollar pieces, three ten-dollar notes and a pair of twenties. PMG reports show only a small handful of Superb Gem Uncirculated 67 EPQ notes as well for all denominations with the following, a single ace, no two-dollar notes, a single five, three tens and three twenties. PMG has not yet graded a Rainbow note at the Superb Gem Uncirculated 68 EPQ level. PCGS has graded only two Rainbow notes at the Superb Gem Uncirculated 68 PPQ level, this five and a single deuce.

The offered note immediately grabs attention with large even margins that give a true picture frame like elegance to the design. The impression is incredibly sharp with profound detail in every intricate aspect of the widely popular "woodchopper," design. The under-printing at top is seen in a deep green hue and shows nice clarity of the wording which creates it. Vivid and well-embossed overprints are seen with respect to the large spiked Treasury seal at right and deep red serial numbers. Countless embedded silk fibers are seen throughout the body of the note and give a great sense of depth and originality as they are seen raised off the paper. The verso design is also seen with strong green ink tones and when back lit, is registered with precision against the borders of the face layout.

Overall this terrific item will likely remain by itself as the finest known 1869 five-dollar legal tender. A single other note from the entire issue, an 1869 two dollar, has earned the same PCGS Gem New 68 PPQ grade. That note was sold publicly in January of 2006 and brought a commanding $40,250. The recent popularity of registry sets will increase the desirability of this item and help separate the collection it enters from others. A historic opportunity for collectors seeking the finest available material.