Meet Me At The Fair! Part 1 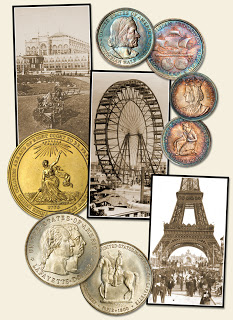 by Q. David Bowers
Harvey G. Stack Remembers
Part 1 of 2
By Q. David Bowers, Chairman Emeritus
Early Exhibitions
“Meet me in St. Louis, Louis, meet me at the fair…” So went the lead-in to a popular song of 1904 relating to the Louisiana Purchase Exposition. Numismatically, the event was important, as we’ll mention in Part 2.
The first American event truly worthy of the title of “world’s fair” was the 1876 Centennial Exhibition held in Philadelphia. (Later, “exposition” was a preferred word for most other events.) This featured a veritable city of newly constructed buildings, grand plazas, walkways, and the like, showcasing advances in technology, presenting art from ancient times to the present day, and offering a lot of old-fashioned fun. No commemorative coins were issued in connection with this event, but tokens and medals proliferated—dozens and dozens of them, so many that they would be hard to count today.
Mention should be made of the Exhibition of the Industry of all Nations, which sounds like a world’s fair, but wasn’t. This was the title given to the first display at the Crystal Palace, New York City, a strictly business enterprise that opened in 1853. None other than Phineas T. Barnum was in charge of the publicity. Many displays were set up, mostly of a commercial nature, under what was strictly a business enterprise—not sponsored by the United States government or any other nonprofit entity. The activities were in one building. Resembling a giant greenhouse, it was inspired by the Crystal Palace in London, which was a world’s fair held in 1851. Over a period of years, until the structure burned to the ground in 1858, many events were held at the New York version. One of the most notable was a grand festival in 1858 celebrating the completion of the Atlantic Cable. However, a world’s fair this was not.
The World’s Columbian Exposition
Fast forward to 1892, when the World’s Columbian Exposition was planned to open in Chicago, to celebrate the 400th anniversary of Columbus’ discovery of America (not that it was lost in the first place!)
In connection with the event the first American silver commemorative coins were struck at the Philadelphia Mint. These were known as Columbian half dollars and were publicized as souvenirs, not commemoratives.The latter word would come into wide use later.
The best-laid plans often go astray, construction lagged, and it was not until 1893 that the gates were thrown open to the general public. During the late spring and summer millions of people thronged through what was called the White City, alabaster structures of great beauty (actually made of a composition known as “staff,” which looked nice but had no enduring properties). The gigantic Ferris Wheel was the main attraction. More Columbian half dollars were struck, these with the date of 1893, actually commemorating the 401st anniversary of Columbus’ “discovery.” Thus began the first of irregular and illogical commemorative coin dating, which has extended until modern times (such as a dollar for the 38th anniversary of the Korean War, to mention just one such production).
Late in the game, after the exposition was well under way, the 1893 Isabella quarter dollar made its appearance and was sold in limited numbers through a modest display in the Women’s Building. This became the first commemorative quarter dollar. Today it is recognized as the only commemorative coin of this denomination. All other quarters, including the beautiful Statehood coins, cannot be considered commemoratives as they were made in unlimited quantities and distributed at face value. One of my family quests is to learn more about the five paintings my great-grandmother, Frances Mumaugh, is said to have exhibited in the Women’s Building. One is listed in an official catalog, but nothing is known about the other four. She was a prominent artist in Omaha and exhibited widely, including at the 1904 World’s Fair in St. Louis.
Returning to numismatics, thus in 1892 and 1893 were launched the first American commemoratives specifically related to a world’s fair. For the same event, countless tokens and medals were also issued, including one featuring art by Mint Engraver Charles E. Barber on one side and sculptor Augustus Saint-Gaudens on the other. This spawned or helped continue Saint-Gaudens’ disdain for Barber’s work, which he called “wretched.”
The 1900 Paris Exposition
The 1900 Lafayette silver dollar was the next coin produced for a world’s fair, this being the Paris Exposition of 1900—a grand affair that outdid all predecessors on the European continent. This was the era of Art Nouveau, and the work of its master, Alphonse Mucha, was much in evidence there. These coins were sold stateside for $2 each in a program that did not attract much attention. Proceeds were to go to help erect a statue of Lafayette, by Paul Wayland Bartlett, in Paris, but work fell behind schedule and it was not finished on time.