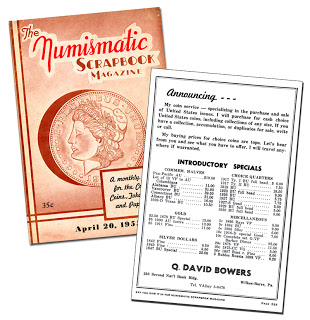 Back in 1955, I was fairly well steeped in numismatic tradition, through reading, hardly by first-hand experience. I had only been a coin collector since 1952, although I could say and pronounce numismatist correctly. With a limited budget I mainly collected coins from circulation at the outset, and concentrated on building a numismatic library.

As strange as this may seem today, in the early 1950s scarcely anyone was interested in collecting old coin books, magazines, and catalogues. Members of the Wilkes-Barre (Pennsylvania) Coin Club, on learning my interest, deluged me with piles of copies of The Numismatist, The Numismatic Scrapbook Magazine, and auction catalogues. Concerning the latter, the only one that seemed to have any particular value, perhaps a few dollars, was the 1941 presentation by B. Max Mehl of the William F. Dunham Collection. Others dating back to the previous century were of little or no commercial value.

By 1955 I had developed a number of different specialties. I had an active business in buying and selling pattern coins in an era in which these were a niche at best, and most dealers did not handle them at all. I also enjoyed colonials and collected copper coins of Vermont, Massachusetts, and Connecticut, staying away from New Jersey coppers as my fine friend Jim Ruddy collected those. Anything else, such as Massachusetts Pine Tree shillings, for example, was way out of my financial reach.

Somehow, probably through corresponding about patterns and colonial coins, my image as a buyer far exceeded my financial resources. Many people thought I could write a check for whatever I saw, but this was hardly the truth. To buy one coin I usually had to sell another!

Numismatics was a wonderful hobby then, as it is now. Investors mainly concentrated on bank wrapped rolls and Proof sets, forming a division or niche in the field, but not driving it. The main buyers of coins did so for their collections, and the word investment was hardly ever heard. However, it was a given—just about everyone knew that a fine collection, carefully gathered, would do well upon its sale.

Returning to the 1955 story, at the convention in Omaha, the bourse was in the grand ballroom of the Fontenelle Hotel, a drafty old place with its own charm. Cincinnati dealer Sol Kaplan and California dealer Abe Kosoff spent a fair amount of time with me at the show, as I had been perhaps their best customer for pattern coins, one of their specialties. At the same event, the Professional Numismatists Guild had its first general meeting, but I was hardly in the category of old-time professionals. Kosoff and Kaplan were in charge of that.

The same duo had large numbers of leftovers from the William Woodin estate (which Abe Kosoff acquired when he was part of Numismatic Gallery) plus the recent (early 1954) Palace Collections sale in Cairo, dispersing the collection of King Farouk. At that time I had also been a wholesale source for Kosoff. In California he had customers for sealed 1,000-coin bags of Morgan and Peace dollars. These were held in large quantities by the Federal Reserve Banks and some other locations. Those obtainable at face value in California tended to be different dates and mints from those in the East. His arrangement was to send me funds, I would have my bank order bags through the Federal Reserve System, and then I would ship them off, earning 10% in the process for hardly any work. Abe Kosoff made a point of squiring me around the show and introducing me to other dealers I had not met in person before.

All went well at the convention, except for a little incident which I remember to this day. In my case was an 1849-O half dime, a scarce variety, well circulated, but still a desirable coin. An older gentleman came by the table, while the lid was up and I was talking to someone else. I soon discovered the half dime was gone. The dealer next to me told me it had been shoplifted, but I didn’t know what to do except to suffer silently. Certainly I wasn’t in a position to stir anything up, being a guest at the first show. Apparently the thief was a well-known old timer, and all dealers, except clueless me, watched him carefully as he moved from table to table.

Then there was a nearby dealer with piles and piles of sparkling double eagles for less than $40 each—not much over melt value. I kept busy at my bourse table, with a constant stream of visitors buying and selling. At show’s end it was announced that about 500 had registered—an all-time record. Those 500, however, were nearly all dedicated to the hobby, and I believe that most everyone had a good time.

Lots of memories, nearly all of them nice!