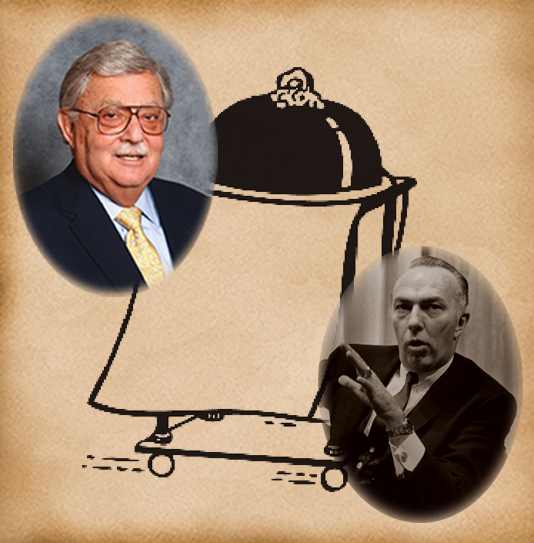 by Stack's Bowers Galleries
Harvey G. Stack Remembers
John J. Ford, Jr. was a legend in his time and during his many years in numismatics there was usually a story to be told about him. Some stories extolled his great memory and knowledge, some his desire to make his cataloging different and more informative, and some told of his tendency to lecture about a rare coin or a rare find.

This story is about an adventure John Ford had while attending an American Numismatic Association convention in New England. Like all summer shows, the ANA annual convention was usually during the hottest part of the summer. Few of the sleeping rooms had air conditioning and it was rare in the early 1960s that the bourse floor was adequately cooled.

John usually got a two-bedroom suite on a high floor with a living room and usually shared the cost with a collector. In this instance he was sharing with Emanuel (Manny) Taylor. John always at his dinner in the suite so he could put on a pair of short and a T-shirt and open all the windows and spend the evening discussing numismatics with his “guest.” On this particular evening the two men looked at the room service menu and John, in his typical fashion, ordered several courses, wrote out exactly what he wanted and exactly how he wanted it prepared as well as four bottles of beer. At the time, Manny was trying to lose weight so he ordered food sparingly and only iced tea to drink.

As they waited for dinner they started to discuss early silver dollars of which Manny had during the previous decade assembled an exception set. They analyzed rarity and variety, fought about die states and errors in Bolender’s descriptions, and thus began an evening of discussion. About 30 minutes into the conversation, room service was at the door and the waiter pushed the table tray down the small hallway into the room. John and Manny sat down to eat, continuing their heated discussion.

Because of the heat, when dinner was complete they both felt that they should call room service to remove the used trays and dishes. When the waiter did not appear in 30 minutes John got worked up and said, “Manny let’s get this stuff out of here, it smells!” John tried to push it out himself and when that didn’t work he told Manny to push while he pulled. John got to the door, opened it and started to pull the table out into the hallway. However, the table got caught on the doorknob, leaving John in his shorts trying without success to pull it free. Seeing John struggling in the hallway caused Manny to laugh like crazy, which did not please John. “You dope,” he said. “Pull the table back in the room.” But Manny was laughing too hard to do anything.

All of a sudden down the hall, the elevator doors opened and out came four of the wives of ANA officials. They were headed John’s way and he yelled, “there are ladies coming, pull the tray back inside.” But Manny was now laughing even harder and still could not help. John’s modesty overcame him; he moved back a little way into the hall, took two giant steps and tried to jump over the table into the room. Instead, he landed square in the middle of the dirty dishes and food still on the tray, and then slid off the other side into Manny, who was now on the floor laughing uncontrollably.

“Do you think the ladies saw me?” John asked.

“Oh, sure,” replied Manny through his convulsive laughter. “They wanted to take pictures.” They both got up off the floor and called room service again to come clean up the mess, which took almost an hour to accomplish. Meanwhile the two men cleaned themselves up and John sat down in an armchair, took out a box of Cuban cigars, gave one to Manny and sat there puffing away.

“You aren’t going to tell anyone about this, are you?” he asked Manny.

“How could I not tell Harvey and all your other friends how much you enjoyed dinner tonight?” Manny replied. And the next morning, after telling me the story, Manny told the whole group at breakfast, “John really knows how to fly — he proved it to me last night!” Of course, the ladies in the hallway told their husbands a different version, about the guy in shorts who made a mess with food all over, who they hoped was not an ANA member.

This was a story that we often laughed about over the years, one of the times when the subdued, knowledgeable John J. Ford, Jr. was shown to be as human as the rest of us.