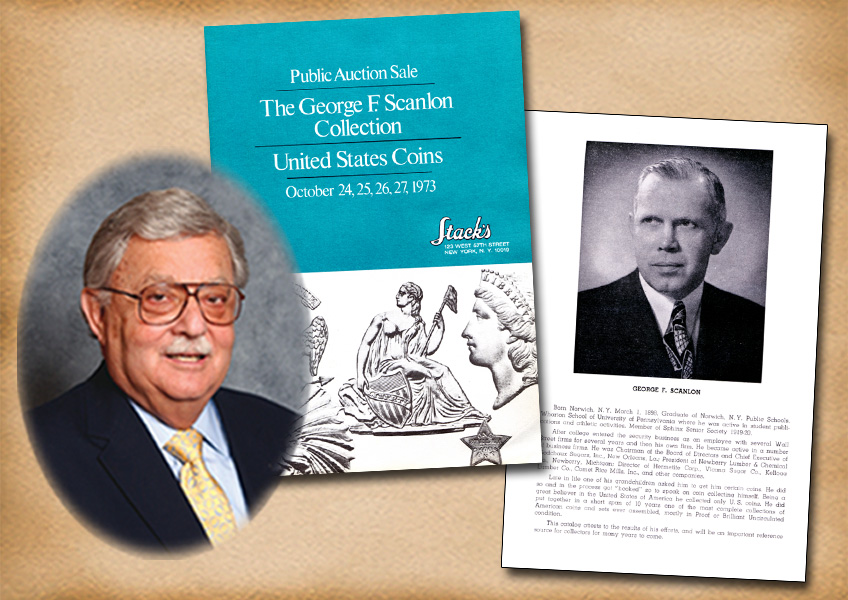 by Harvey G. Stack
Harvey G. Stack Remembers
While going through the hundreds of catalogs that Stack’s produced from 1935 to the present, I came across names of collectors who built collections for themselves, and as a way of sharing the fun of numismatics with their families.

One such man was George F. Scanlon. Born and brought up in Norwich, New York, he graduated from the Wharton School of Business at the University of Pennsylvania. After graduating in 1920 he entered into the security business. He was a successful officer or director of Godchaux Sugar, Newberry Lumber and chemical, Hermetite, Vicana Sugar, Kellogg Lumber Co., Comet Rice and other successful companies.

Somewhat late in life his grandchildren asked him questions about certain coins and he "became hooked" on coin collecting. As a great believer in the United States he tried to assemble several collections (to be shared with his grandchildren), and tried to acquire as many different examples to complete certain series. His desire for beauty and quality led him to collect as many different Proof and Uncirculated specimens as he could.

His vast collection was offered and sold by Stack’s in October 1973 and contained nearly 2,800 lots; because of its broad scope, the public auction sale attracted participation from collectors all over the country. Because he had duplicates and partial as well as full sets, the sale offered many the opportunity to find missing links in their collections. Not every series was complete but the quality was impressive.

He possessed a large offering of copper coins — half cents and large cents — in choice condition. His small cents included several dated 1856 and a Proof 1864 L from the Charles Jay Collection. He had two, three and five cent pieces in both Proof and Uncirculated. In silver he had half dimes through silver dollars in outstanding grades, acquired from many Stack’s auctions of prior years. He had early Proof sets, starting with 1858 and complete to 1915, many in their original wrappings from the Mint.

His gold coins comprised gold dollars to double eagles, with examples pedigreed to famous sales of prior years including that of George Walton, the source of most of his Southern gold. Again, the series were not complete, but included many Mint State and Proof examples.

Mr. Scanlon personally attended auctions and examined all lots he bid on. He liked to sit in the corner of the room, listen to the action, make voluminous notes and bid enthusiastically for the items he wished to add to his holdings. He mostly kept to himself, but was very close and friendly with what he termed " his favorite coin auctioneers," who helped him with guidance and valuations so he could be competitive. He had somewhat of a New England temperament, always wore a suit and a tie to a sale and could become stubborn when he really "wanted or needed something." As a student of coin values, he knew what he was doing and was not afraid to let his competitors know that "he knew" and that he could not be "run up" by others around him.

However, a flood occurred in a bank vault where he stored his, and while his coins were fortunately not hurt, this led him to decide to make his coins available to the market. He realized that his beloved coins would not have been his if previous collectors had not chosen to stop collecting or if their heirs had not decided to put those collections on the market. As he always told me " a collection is developed to satisfy a want or desire to own, or complete, and since we can no longer, (legally) make more to fill the ever growing demand, we must hold them till we are ready to ‘redistribute’ the coins to the next group, to share with them the pleasure and satisfaction."

Coins acquired from the George F. Scanlon Collection have surely become prizes in many collections today, and we are proud to have helped him build his collection and later to offer it for sale to the next generation of collectors. It remains one of Stack’s "heritage collections" formed in the 20th century.