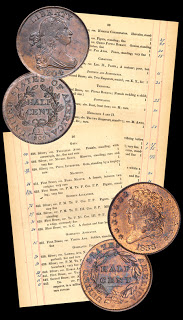 by Q. David Bowers
Answers for the Avid Collector
Question: I wonder if you have ever come across an old-time advertisement that listed a price for a half cent, such as 3½ cents? What exactly was the usefulness of the half cent? There must have been some transactions that involved them because a great number of them are well worn. G.S.

Answer: With regard to things being priced at a half cent, in the early 19th century a popular coin in circulation was the Spanish one-real coin, known as a “bit,” valued at 12½ cents. Two of these, valued at twenty-five cents, were called “two bits,” a term still seen today. It was not unusual for admissions to be priced at 12½¢ or 37½¢, or some other odd figure. A copper half cent provided a way to make change. However, half cents were never particularly popular in circulation, as a lot of transactions were simply rounded off and the odd half cent ignored.

It is a little known fact that numismatic auctions were often conducted in cents, for inexpensive items. Thus a lot might be sold for 12½ ¢. However, this was always rounded off on the sales invoice.