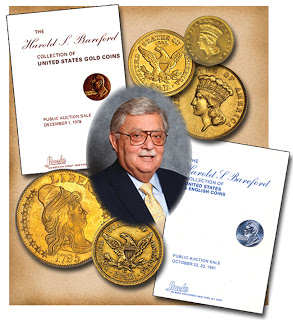 by Harvey G. Stack
Harvey G. Stack Remembers
Harold S. Bareford was one of the great collectors of the mid 20th century. He was a constant visitor to the Stack’s offices or “club house” in the late 1940s, virtually up to the day he died. I met Harold in 1947 when he visited our shop at 12 West 46th Street. He often came by to see “what’s new.” He was a leader in collecting, proud of his collection, stubborn about quality, and always trying to acquire the best. During the late 1940s and 1950s many of the collections formed in the earlier part of the 20th century were cataloged and put on the market. They offered a great source of specimens for Harold to consider.

I quote here from a biographical sketch, which appeared in Stack’s 1978 and 1981 catalogs:
“Harold Shaw Bareford was born April 21, 1894 in Millville, New Jersey, the youngest son of William Albert Bareford, master glass blower, and Mary Carey Shaw. Harold died suddenly at home on April 10, 1978, after spending a typically full day at his New York law office. He was a high school valedictorian in 1912 and graduated in 1916 from Cornell Law School with honors.

“He was commissioned in the field artillery at Plattsburgh in November of 1917 and served until December of 1918. He joined the law firm of Thomas & Friedman and soon became a full partner. In 1920 they joined the legal staff of their important client, Warner Bros. Pictures. In 1929 Bareford was made General Counsel, Assistant Secretary and Director of Warner’s. In 1943 he took a leave of absence to go on active duty as a Captain in the Coast Artillery. Discharged as a Major 1945, he returned to Warner’s and on his retirement in 1959 he resumed full time private practice.

“Harold Bareford became a serious numismatist after the Second World War and was a member of the ANA and the BSN, a fellow of the ANS and the RNS, and a member of the 1969 Federal Assay Commission. He was an officer from its inception of the Metropolitan New York Numismatic Convention, serving with such numismatists as Raymond Gallo, Vernon Brown, Martin Kortjohn and Edward Hessberg. He was also president of the New York Numismatic Club from 1959 through 1961.”

Because of Harold’s exacting standards, he bought very few of the larger gold coins as they were rarely to be found in the condition he desired. He concentrated on half eagles and smaller denominations. For example, he was able to assemble a remarkable and nearly complete collection of gold dollars. There were a few missing because he never was able to find suitable specimens and would not buy inferior ones. His collection also contained a nearly complete set of Charlotte and Dahlonega quarter eagles and half eagles in Gem condition, a spectacular run of $3 coins, and many exquisite Proofs in all denominations. The collection included such classic rarities as the 1795 half eagle with Large Eagle reverse, the 1848 CAL. quarter eagle, the 1875 dollar, quarter eagle and half eagle, and the 1933 eagle.

Careful study of his collection showed that no collection of half eagles has ever come on the market in which the average condition of the coins has been higher. This is all the more remarkable when you consider that he bought no duplicates, and never sold or traded up for a coin in better condition. Blessed with a photographic memory, he both bought exactly what he wanted and knew to be the best, or he didn’t buy it.