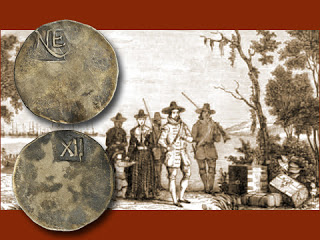 by Stack's Bowers Galleries
United States Coin of the Week
Here at Stacks Bowers Galleries, we have had the extreme privilege in recent sales to offer a wealth of rare and important colonial and Early American coins. A prime example is the Massachusetts Bay Colony NE sixpence that sold in our November Baltimore Auction, for an amazing price of $431,250.

At our upcoming January 2013 Americana Sale, in New York, we will be featuring another rare NE coin, this time a shilling. The piece is from an extremely rare die variety, Noe III-B, and is described by our cataloger as: ôEasily one of the most famous — and important — of all colonial issues.ö

The remainder of our auction catalog description states:

ôDeep golden-gray throughout with no surface marks to draw the viewer’s eye. We do note, however, some faint old scratches around NE that come to light under low magnification. Some soft depressions and faint planchet waviness are seen, as struck and adding to the overall charm of the piece. NE punched at the 11 o’clock position, XII punched at the 1 o’clock position on their respective sides. The NE and XII are boldly and deeply punched, with just a hint of weakness in the surrounding cartouches.

ôA rare variety among a rare design type, with Noe III-B as offered here missing from some of the most important collections ever formed, including Stearns, Garrett, Picker, Norweb, Roper, the Hain Family Collection, MHS (1970), and Oechsner. The present piece is easily the visual equal — and essentially the physical equal — of Ford:2 (Stack’s, October 2005), the famous Wurtzbach Plate coin. When cataloger Michael Hodder wrote the description for Ford:2, he noted that he had seen but four examples of Noe III-B, a figure that included the Ford-Wurtzbach piece, and went on to note that Noe III-B is æextremely rare.Æ

ôFrom a relatively late state of the dies, with a bold crack from the bottom of the E downward through the tail of the N, below which it forks into two cracks; this is a later state than Ford:2. On the reverse denomination, the second I is slightly repunched, and a bold crack runs from the base of the I to the bottom edge of the cartouche, as seen in the Ford coin. The coin itself is of near-perfect roundness and, as noted, without serious problems of any nature.

ôThe appearance of any NE shilling — or its diminutive parts of sixpence and threepence — at public auction is a numismatic event of no small proportion. We suspect more than one advanced specialist within the Massachusetts Bay Colony coinage discipline will set their sights on this famous American treasure. We suggest they aim high, as the bidding for this rare issue will be nothing short of intense.ö