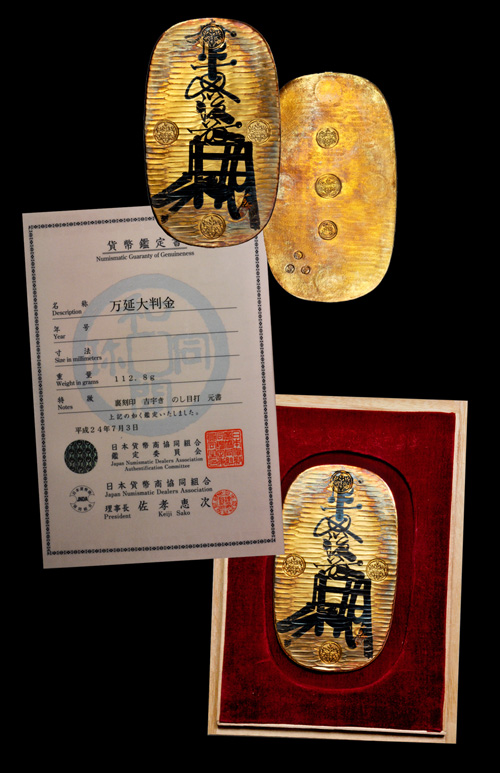 by Stack's Bowers Galleries
World Coin of the Week
The ANA World’s Fair of Money auction to be held this August in Chicago is shaping up to be an extraordinary event. As the official auctioneer of the ANA for 2013, Stack’s Bowers and Ponterio will present a stunning array of numismatic and paper currency items for a wide spectrum of collectors. Our highlight for this week is a fascinating piece of Shogun-era Japanese currency. The Tokugawa Shogunate was a feudal Japanese military government which followed the Japanese “Warring States” period. For over 250 years the Tokugawa Shoguns ruled feudal Japan as autocrats with the Samurai as the elite warrior-caste. This era was steeped in a strict class hierarchy, and while the emperor acted as a religious and political leader, the Shogun held the military power and was ultimately more powerful than the emperor.

The currency system of Japan before the Tokugawa Shoguns was dependent on Chinese bronze cash coinage. The founder of the Tokugawa Shogunate, Ieyasu, established a gold, silver, and bronze denomination system which lasted until the Meiji Restoration which ended the Shogunate’s rule. The largest denomination in this coinage system was the “Oban” gold piece, which was typically used as a special reward or gift rather than in day-to-day transactions. This piece is from the Manen era, the final era before the Meiji Restoration and after U.S. Commodore Matthew Perry helped to end Japan’s isolationist policies under the Shogunate. This ovoid gold plate weighs 112.8 grams and is comprised of approximately .344 gold and .639 silver. The obverse features the Kiri Crest of the Office of the Prime Minister of Japan. The symbol – or Mon – is the Paulownia flower and is known as the Princess Tree in Japan. The symbol appears in the 12, 3, 6, and 9 o’clock positions. The machine-made crenulations are most visible on the obverse and provide pleasing eye appeal. This piece displays some peripheral toning, which serves to draw the eye toward the center to the stunning calligraphy. An interesting feature of this piece is its security edge, which prevents any unscrupulous individuals from shaving or filing the edge of the coin. The reverse of this piece features the Paulownia flower Mon seal punched in the center and one just above center. Below the center punch is another Japanese symbol punch. The 7 o’clock position contains a triangle design of three smaller punches as well. The Oban type is known for the stunning calligraphy on its obverse face. The inking on this beautiful piece is original, as guaranteed by the Japanese Numismatic Dealers Association (JNDA). The JNDA includes an official certification placard signed by the president of the JNDA: Keiji Sako. The piece is housed within a red leather official JNDA holder, and a wooden display case with a red velvet interior. This Oban is graded choice Almost Uncirculated. A quality Oban makes an excellent centerpiece for any numismatic collection.

Look for this and other World numismatic pieces in our upcoming August ANA Sale. Preview this impressive coin along with the rest of our auction this August at the Stack’s Bowers and Ponterio office located in Irvine California or New York City. For details please refer to the Auction Schedule/Details link under Current Auctions at www.StacksBowers.com. To schedule an appointment, please call 800.566.2580.