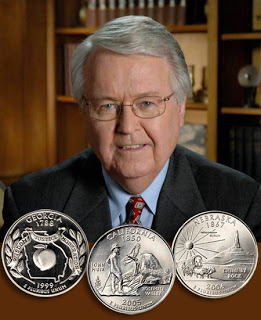 Jay Johnson, director of the Mint in 2000 and 2001, passed away in mid-October of 2009. He was a fine friend, always willing to help with research or anything else. We continue our sharing of some of his comments contributed to The Official Red Book of Washington Quarters, by Q. David Bowers, Whitman Publishing LLC, 2007.
Innovative programs had been devised under the watch of Mint Director Diehl and continued with Jay Johnson when he became Mint director. One of those was the use of a cartoon character. During this period, the state quarters program was riding high. In November 2005, Director Johnson, in reply to Dave Bowers’ inquiry about the numismatic fate of Kermit, said this:
As to Kermit, yes, he was hired through his parent company which produced Sesame Street, and he was the “spokesfrog” for the 50 State Quarters. We then had a series of TV ads featuring the actual employees of the U.S. Mint, from engravers to press operators at the various mints, showcasing the coins and U.S. Mint themselves. All this stopped when some members of Congress objected to the expenditures and spending money for “promotion” of the 50 State Quarters® Program, and Henrietta Fore cancelled most of the marketing contracts of the U.S. Mint.
There has since been a slight return of TV ads selling the generic U.S. Mint products, but NOT specifically the 50 State Quarter series NOR the Golden Dollar (remember George Washington using a Golden Dollar in TV ads).
As a result (in my opinion) with the falloff of the TV promotion ads, the 50 State Quarters® Program itself slowed down. Fewer quarters were demanded, and fewer were produced. Other factors included the slowing of the economy in general and a mid-term lag in interest in a ten year coin collecting program.
BUT, I think as it nears an end and going into 2008, with people seeing the end of their 10-year 50-state program in sight, the program will finish on a strong note, and all those who have been quietly hoarding their 1999 to 2005 quarters will see a renewed interest in getting the complete set, and the program will grow to a strong finish.[1]
[1] Communication with the author, November 8, 2005.