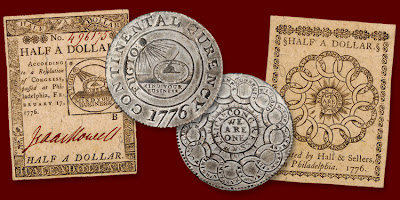 by Frank Van Valen
United States Coin of the Week
The basso profundo voice of Jim Jones was a grand thing to hear. The first time I encountered that voice was in the late 1980s when Jim first called Bowers and Merena to enroll in the Collection Portfolio Program, a monthly acquisition program that I managed at the time. The typical CPP participant collected Morgan dollars, type coins, Indian cents, and other mainstream collecting disciplines. Jim, however, was different. He outlined his plans to me and I was intrigued with his approach to collecting. He was seeking historically important numismatic items, coins, medals, and tokens that outlined the history of the colonies and early America in general. He also explained he was fussy, and though he had the money to pursue his plans, he didn’t want just any old coin, he wanted the finest of each type he was interested in.

In Jim’s eyes, the crème de la crème of American numismatic items was always the 1776 Continental dollar, and after several years of waiting, Jim purchased what he considered to be the centerpiece to his collection, the very same coin we are offering in our March 2012 Baltimore sale. Our cataloger thought highly of the coin and his able description is included here:

“A nicely preserved example of this American classic. Good lustrous flash remains on both sides, which show some minor evidence of handling but no significant friction – we would not be surprised to see this piece shed the old green label holder in which Jim bought this coin in 1996 and someday find a new one with a higher grade. The pewter surfaces show no evidence of tin pest. As often seen on this variety, a small internal cud is present over GI of FUGIO; the two silver examples from these dies were struck from the same die state. The rims are sound and no damage or major faults are noted, just the merest friction, perhaps even a week’s worth of circulation on the soft surfaces. Jim called this coin “the centerpiece of my colonial collection” and reveled in its historical associations. Its design was by Benjamin Franklin, and its mysterious origins perhaps trace themselves to New Jersey, where engraver Elisha Gallaudet was working at the time. Jim described its legends as recalling “the conscientiousness and frugality of ‘Poor Richard,’” sentiments that struck a chord with him. Today, Continental dollars are classics, the only collectible American coin dated 1776, and the first metallic appearance of this most famous early American design. Jim paired his with a specimen of the February 1776 Continental paper money that featured this same design. Off the market for 15 years, this piece will hopefully find another well-formed cabinet to highlight.”

Though I spoke often on the phone with Jim over the years, we only met twice in person, including a week in Colorado Springs at the ANA Summer Seminar where Jim took a course and gave a “bull session” about his fascination with early American numismatics, particularly of North Carolina, which he held dearly. Jim always wondered if his hobby was an investment as well. If I could look him in the eye right now I’d be able to tell him “you did well, Jim, you did well.” I was happy to know the man and pleased that we were friends.