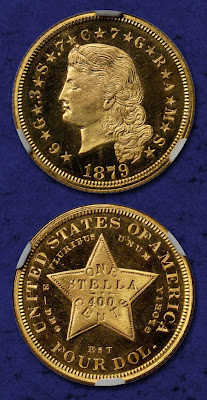 by Frank Van Valen
United States Coin of the Week
The finest certified — and almost certainly finest known — 1879 Flowing Hair $4 Stella, arguably one of the most famous of all U.S. gold coins, will cross the auction block in a spectacular offering of rare and collectable coins in Stack’s Bowers Galleries June 2012 Baltimore Auction event. Graded Proof-68 Ultra Cameo by Numismatic Guaranty Corporation (NGC), this stunning Superb Gem Proof Stella is literally in a class all its own. The fields on both sides are deeply mirrored in finish, the devices are frosty throughout, and the eye appeal is second to none. Indeed, neither PCGS nor NGC have graded another Stella of any date or type finer than Proof-67.

Struck in just two years, 1879 and 1880, and in two distinct types, the Flowing Hair Stella was designed by Charles E. Barber, the Mint’s chief engraver, while a second and much rarer type with Coiled Hair is credited to Barber’s assistant, George T. Morgan (best known for his now famous Morgan silver dollar design). The gold Stella issues are considered patterns, though the mintage of some 415 to 425 or so pieces for the 1879 Flowing Hair actually makes this issue one of the most “common” of all U.S. Mint pattern types. Of course “common” is a relative term. Many of the Stellas struck in 1879 were presented to congressmen and other dignitaries, many of whom reportedly spent them or used them for jewelry. Walter Breen relates an old tale wherein many of the coins were turned into jewelry and given to the mistresses of members of congress, a fanciful tale not backed up by any direct information from the era.

The Stella (Latin for “star — the prominent central design on the coin’s reverse) was the brainchild of the Honorable John A. Kasson, U.S. Minister to Austria, who endeavored to find a U.S. gold coin that could circulate at par with many of the gold issues of the European nations of the era, including Austria, France, Germany and Great Britain. As if to signify its use in international commerce, the obverse design gives the metallic content of the coin in metric gram measurement — 6 G (gold), .3 S (silver), and .7 C (copper), representing an overall weight of seven grams. To give the coins a more universal appeal, the U.S. motto, IN GOD WE TRUST, was replaced with the Latin motto DEO EST GLORIA (God Is Glorious).

As noted in our catalog description for lot 4265: “As chance would have it, the 1879 Stella was born in an era in which Mint officials had a lively business in the making of restrikes, limited-edition patterns, and other numismatic delicacies. Thus, while 1879 $4 coins of the Flowing Hair design, by Chief Engraver Charles E. Barber, were made for their intended purpose — to illustrate the concept of a new denomination — other varieties were struck to create rarities. The Coiled Hair type by Assistant Engraver George T. Morgan, in fact, was never made available openly to numismatists, congressmen, or anyone else. Instead, they were filtered out of the Mint over a period of time, by privileged officials.” As noted above, some 425 or so were made in 1879 with the Flowing Hair motif, but just 12 or so 1879 Stellas with the Coiled Hair motif were produced. In the following year, 1880, more Stellas were produced, with the tally for the 1880 Flowing Hair type just 20 or so pieces, and that for the 1880 Coiled Hair type, perhaps as few as 10 pieces.

Few are the specialists in U.S. gold coinage — and mainstream collectors as well — who have not dreamed of owning a Stella. Whether enticed by the rarity of the issue or its intriguing denomination, the Stella has been an object of desire among numismatists ever since the late 1870s when the coins were first produced. The Superb Gem Proof-68 Ultra Cameo 1879 Flowing Hair example coming up in our June Baltimore Auction may be out of reach for many collectors, but it is the stuff of which numismatic dreams are made. If you have an opportunity, we hope you will take a peek at the coin, for even seeing it is a thrill. Owning this coin would be a crowning achievement for even the most advanced numismatist.