Looking Through The Currency Catalog 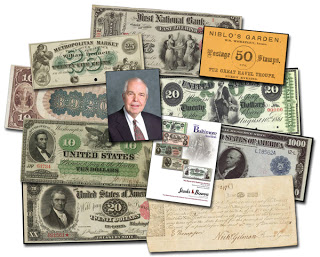 by Q. David Bowers
From the Desk of Q. David Bowers
Welcome to my “walk through” for the currency catalog produced for our series of sales for the Whitman Coins and Collectibles Baltimore Expo. There are three separate catalogs, one being our main catalog with the most lots, another being our spectacular Rarities Night catalog, and the third being the paper money catalog that I discuss here. This particular section contains treasures from the Thomas F.X. O’Mara Collection, the Chester L. Krause Collection, the Nesconset Collection, and other important consignors and properties.

Our presentation begins with private, municipal, and sutler scrip notes from the O’Mara Collection, all of which are scarce, many of which are rare, and others extremely rare. As is so often true when early paper is presented, the word opportunity comes to the fore. Obsolete currency issued by state-chartered banks comes next, including a wonderful offering of rare proofs. You will find anything and everything, paper money issued by the Mormons in Kirtland, Ohio before they headed westward, a gorgeous sheet of Vermont notes including one with a Santa Claus vignette, and others interesting to contemplate. Colonial and early American paper comes next, important for its diversity and also overall high quality. Important federal proof notes and bonds come next – where the word rare becomes common. Actually, each note itself is a superb rarity and how impressive it is to see page after page of proofs. Certain of these may not be offered again for many years, if indeed in your lifetime. The same is true of certain of the bonds.

Regular federal notes commence with lot 5441, an 1861 Demand note, a rarity by any account. Then follow Legal Tender notes in various denominations, Silver Certificates including popular types (with the 1896 “Educational” notes being especially interesting), and more. Series of 1890 Treasury or Coin notes emphasize Uncirculated pieces, after which Federal Reserve notes come to the fore, highlighted by the rare $1,000 denomination from the San Francisco Federal Reserve Bank. Gold Certificates are up for competition next, including an affordable example of the popular “Technicolor” note. Small size paper follows in different series, after which National Bank notes are offered; some of these are from my own collection, as attributed. A number of years ago I had a grand time trying to get one of each different “ace” from as many different National Banks as possible. This particular denomination was of very limited issue and was made only from 1864 to 1875 for the Original Series, and 1875 through 1879 for the Series of 1875. Accordingly, by 1880 they were obsolete, and by the time that numismatic interest developed in collecting National Bank notes (this being in the mid 19th century), nearly all were gone. If you are a successful bidder on one of my notes, I give you a nod of appreciation and thanks. Beyond these there are many choice, interesting and rare National Bank notes from different places, again some of them being sufficiently elusive that it may be a long time until related pieces are available. Among the most beautiful of the early Nationals are the 1882 Brown Back notes, Represented nicely here with several examples, including one from Wyoming.

Confederate paper money comes next, then Military Payment certificates, and denominated envelopes from the Civil War era, when coins were scarce. United States postage stamps were placed in envelopes and used as money. Today the series in general can be called the rarest of the rare. To form a meaningful collection of them will take years. With our auction you will get a great start! The importance of these cannot be overestimated. Beyond that, what with today’s Internet access, it is possible to learn much about certain of the issuers. For example, lot 5957 by Niblo’s Garden was issued by one of New York City’s most famous tourist attractions. Using this postage stamp envelope as a focal point you could give a nice talk at a coin club meeting or convention. Often a numismatic item is one thing and the story about it is another, but the two combined are dynamic. Encased postage stamps, one of my favorite series, begin with lot 5982 and include popular and scarce varieties. The curtain comes down with interesting Fractional Currency notes.

In contemplating all three of the catalogs, I cannot help but be impressed that if someone has recently discovered numismatics and has the three catalogs in hand, he or she will become well informed by spending a quiet evening browsing through them. Just about everything is offered! I hope you will participate in our Baltimore sales, either by attending in person or, as most people do, on the Internet. However, don’t overlook the personal experience, as Baltimore is a wonderful town to visit, the Stack’s Bowers staff has the red carpet out for you, and a great opportunity is guaranteed.