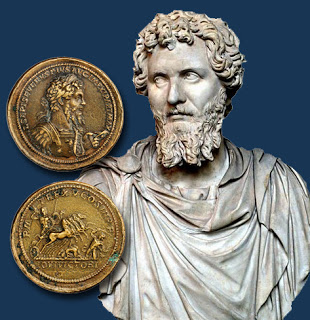 by Stack's Bowers Galleries
World Coin of the Week
This week our feature from the Robert O. Ebert Collection is one of the most remarkable portraits of Emperor Septimius Severus on a numismatic item (R. A.D. 193-211). Lucius Septimius Severus was born in a Roman colony in North Africa, Lepcis Magna or Leptis Magna which is the modern day city of Homs, Syria. Growing up here Severus must have been aware of the chaotic groups of enemies outside the borders of Roman control and so upon his ascendance to the imperial throne, Septimius Severus followed the most successful model of Roman Emperor, the Warlord. This medallion is a beautifully rendered representation of Rome’s military might, as evidenced by part of the inscription on the obverse stating IMP XI which means he was ‘hailed Imperator’ eleven times, meaning he was given command of an army. Septimius used his expert command of his army to outmaneuver two rival generals to seize the Imperial throne from a wealthy Roman, who had purchased the position after assassinating his predecessor.

Once Septimius secured the title of Emperor, he set off to win valor for himself and Rome. After two major wars against the Parthians, the victorious Septimius accepted the title of Parthicus Maximus, which appears on the obverse of the medallion (PART. MAX.). The other titles on the obverse include Divine Augustus “PIVS AVG” or simply Divine Emperor. These titles appear around a stunningly pristine cuirassed right-facing bust of Septimius Severus with a laureate, clad with an aegis on his chest, who is holding a sword in his left hand. The use of full military dress and his hand resting on his sword directly states his connection to the army, the supreme source of his right to rule the empire.

The reverse of this medallion contains other titles of Septimius, which did not relate to his military conquests. They include P. M. ‘Pontifex Maximus’ or the supreme religious leader of the Roman state, and TR. P. XV and COS. III ‘Tribunician Power for the fifteenth time and Consul for the third time,’ respectively. The final title on the reverse is P. P. ‘Pater Patriae’ which is best explained as the cultural leader or ‘Father of the Country’. The last inscription ties to the scene illustrated on the reverse, IOVI VICTORI or ‘Jove Victory’. The Roman God Jove (Jupiter, supreme god of the Pantheon) rides to victory, crushing a fleeing enemy in his quadriga and brandishing his iconic thunderbolt. This victorious scene contains exceptional details: Jupiter at right in his quadriga with scepter in left hand and thunderbolt in right, riding down two giants at left, one on all fours pierced by a thunderbolt. This scene of victory over an enemy is thought to commemorate Septimius’ victory in his African campaign near his birthplace. This is supported by the dating of this medallion, which is aided by analysis of which titles he held on this piece. This reverse exemplifies the rule of Septimius and other great Roman Emperors and their conquering of enemies for the glory of Rome.

This bimetallic medallion is composed of orichalcum or yellow brass, surrounded by a copper outer ring. This piece is graded ‘extremely fine’ and weighs 73.28 grams. This massive medallion is believed to be unique struck in this metal, and no other examples are known to have been published in this composition. The detail and exceptional nature of the bust of Septimius cannot be stressed enough; no other example quite matches this 42 mm example of a portrait of the Roman Emperor Septimius Severus on a numismatic piece. The only other published example of a medallion struck from these dies is a silver example listed in Gnecchi plate 22,2.