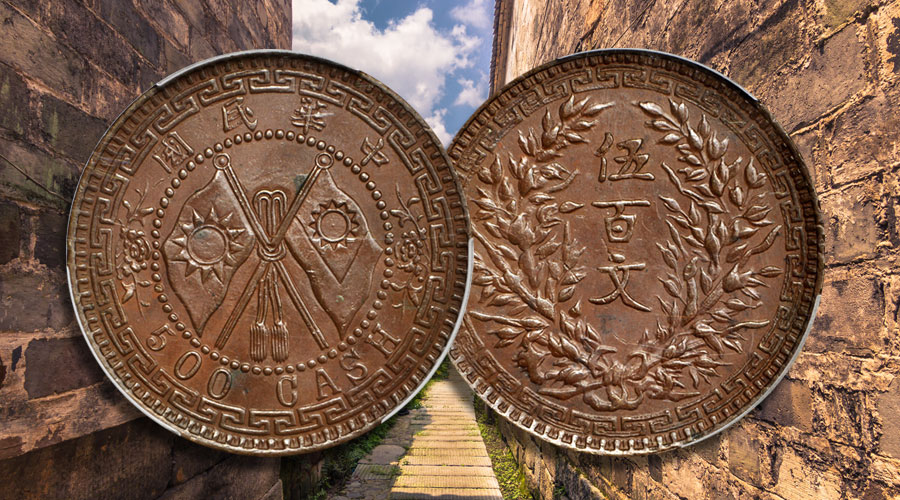 by Kyle Ponterio
World Coin of the Week

This week’s highlight from the Q. David Bowers
collection of Chinese Copper Coins being offered in our April 2-4, 2018 Hong
Kong auction as a stand along catalog is the Mysterious Honan Pattern 500
Cash.  Very little is actually known
about this issue with much speculation.
The general thought is that there are only 12 known or struck, but
according to author Duan Honggang who states in his outstanding study of
Chinese copper coins “The Comprehensive Catalog of Chinese Copper Coins” that
there are several different varieties with about 33 known total examples.  He illustrates examples of each variety with
an explanation of the differences between them.
Duan also goes on to state that the issuer of these mysterious patterns
was the accomplished Liu Zhi who was Governor of Honan.  After the outbreak of the Second
Sino-Japanese war Liu lost his military prowess and was removed from several
appointed positions.

The short live Honan 500 Cash is the largest
denomination copper coin ever issued in China.
The obverse design features the crossed flags of the nationalist
Kuomintang within beaded border, four characters above “Zhonghua mingguo”
(Republic of China), denomination “500 Cash” below, floral spays at sides, all
within Greek border.  While the reverse
displays the denomination in three characters “Wu Bai Wen” (500 Hundred
Cash(Wen)) within wreath, all within Greek border.

The three variations of this issue includes a totally
finished product with all of the design features present such as the piece
being offered in April, tin plated examples of the finished product and
examples where the Kuomintang flag on the right is incomplete missing the
nationalist emblem.  Regardless of the
variety all are considered extremely rare and highly prized.  These coveted patterns are an icon of Chinese
copper coinage and of unmistakable rarity. We expect to see spirted bidding on
this specimen which is fully worthy of a premium bid. The chance to acquire
such a piece is not to be missed as another may not appear for many years.

We are no longer accepting consignments for our April Hong
Kong auction. We are however taking consignments of world and ancient coins and
world paper money for our May Collectors Choice Online (CCO), our August 2018 Hong
Kong, August 2018 American Numismatic Association (ANA), October 2018
Collectors Choice Online (CCO) and our 2019 New York International Numismatic
Convention (NYINC) auctions. If you are interested in consigning your coins and
paper currency (whether a whole collection or a single rarity) be sure to
contact one of our consignment directors.