Never Thought I’d See This at an ANA Convention 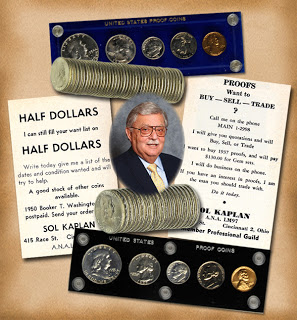 by Harvey G. Stack
Harvey G. Stack Remembers
During the Second World War, and for a short period thereafter, the U.S. Mint, which was busy making coins as well as special items for the War effort, did not have time to issue Proof sets as they did from 1936 through 1942.

Collector demand grew for these sets, and in 1950 the Mint started once more to issue special Proof sets. These coins were wrapped in cellophane jackets, stapled at the tops, and the set of five coins (1¢, 5¢, 10¢, 25¢ and 50¢) were shipped to collectors in a sealed gray box. The demand was so great that they issued some 50,000 sets. The sets remained in demand and premiums rose, especially as the sets were made in succeeding years, in greater quantities.

Dealers spent lots of time trading these sets, paying high premiums for the early 1936-42 issues, and the value of the later coins kept growing as the demand increased. So hysterical did the demand become that the Proof sets that were still in “sealed boxes” fetched as much as 25-35% more than an “open set” (where the coins could be examined. Blind stupidity ruled the day!

There also was a demand for late issue rolls, as other than the Lincoln cent, the Jefferson nickel, Roosevelt dime and Franklin half dollar were growing in popularity. These coins, many of which could be found in change or in rolls from banks, were popular, as they were short sets, readily completed. But certain dates in these series were very difficult to find; some were not readily found in change or general circulation. With the advent of new inexpensive albums by Whitman for 25 Cents, (the blue folders) for complete late series, the popular National Album page and loose leaf covers to house sets in finer grade, and the Lucite holders for choice sets, the entire late issue series came into strong demand.

Suddenly, dealing in rolls of Mint State coins became, and even bags of Mint State coins became a tradable item. It seemed like everyone wanted to collect and the hobby grew in leaps and bounds. So crazy was the demand, that bags brought more proportionally than individual rolls, and rolls brought more proportionately than individual coins.

First to appear were rolls and quantities in dealer showcases in retail stores around the country. Before long the rolls and quantities of Proof sets appeared in dealers’ showcases on convention floors. These dealers were known as “vest pocket dealers” who were portrayed as taking coins out of their pockets and selling them at a profit, above face value. It was nothing to see dealers using hand trucks and dollies to move huge quantities of current rolls of coins and boxes of Proof sets onto show and convention floors. The quick profits that could be made on these late issues overshadow the numismatic rarities that the more classic established dealers bought and sold. It soon became a contest — who could sell more quantity, as well as a contest between collectors for who could amass a larger hoard of late issue items. On convention floors this entire period had moments of Bedlam.

Onto the convention floor suddenly appeared a great promotional endeavor, led and conceived by Sol Kaplan, a well known dealer and promoter from Cincinnati.

Sol Kaplan brought to the bourse floor a large blackboard, ruled off with boxes and set up like a Pari-Mutual tote board. Dressed in a blue blazer, with a bright red vest, he appeared as a event seller at a circus or a fair. He started by listing a group of Proof sets and rolls and chanted while taking bids from the collectors and dealers that crowded about his table. He had opening bids, and continued calling out advances as the excited crowds bid. As each item was sold, he cried “Going, going, gone!” and knocked down the item sold. As the lots were sold, some a few dollars below the market of the time, but many far above the market at the dealer bourse, he continued the on the spot auction until he exhausted his stock.

The ANA officials were shocked and took almost an hour or two to decide that the bourse floor was not an auction floor. The operation was disruptive to the dealings and visitors on the floor of the convention and they ordered a “cease and desist.” But Sol didn’t stop till his mission was accomplished.

From that day forward, decorum prevailed and no auction sales of any type were allowed on a convention floor. However, open conventions can attract all kinds of schemes to make money for promoters.