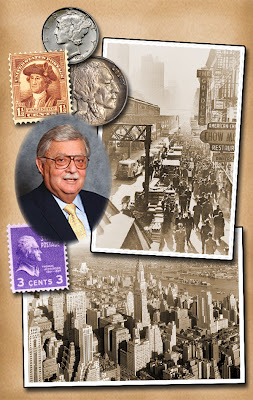 Harvey Stack continues his reminiscences and the story of Stack’s, with numismatic traditions dating back to 1858, in its present form founded in New York City in 1933. Stack’s held its first public auction sale in 1935. Today, Stack’s Bowers Galleries is the longest-established and most accomplished rare coin firm in America.

In many ways, in the early 1930s Stack’s 22nd Street and Sixth Avenue location resembled a newlywed couple’s first apartment, great as a starter but sure to be quickly outgrown. It was a test run, a kind of proving ground for the new firm. In this first year of operation, brothers Joseph (my uncle) and Morton (my father) had the chance to try out their initial concept of handling old gold and jewelry, stamps, antiques and coins. Old gold and watches proved to be largely Depression products, most such material being offered by New Yorkers suffering under the desperate conditions that followed the crash. Antiques presented problems of sheer bulk, demanded a wealth of information that was not always readily available and were a further challenge to the limited supplies of cash on hand.

Coins and stamps provided dramatic contrast. Relatively small, portable and appealing to a wide spectrum of collectors, these collectibles were clearly easier to process and sell. While it is unlikely that a good cache of old gold would ever be turned down, the brothers had already perceived that coins and stamps lent themselves to a dignified business image that could place Stack’s far ahead of the “grandmother’s attic” look presented by so many other New York collectibles dealers.

Then too, lower Sixth Avenue offered major physical drawbacks in the early 1930s. Towering overhead was the Sixth Avenue Elevated, one of the main lines of the city’s half century-old El system, and a perpetual source of noise and shadow for neighboring homes and businesses. The city had broken ground for its new Independent subway system (called the IND to distinguish it from the privately operated IRT and BMT lines operating under existing contracts of 1904 and 1913). The IND would soon link the outlying boroughs to two main trunk lines operating under Sixth and Eighth avenues in Manhattan.

By the mid-1930s, Sixth Avenue was a shambles, disrupted by the massive “cut and cover” digging underway beneath the still operating El. The Sixth Avenue subway would not open until 1940, making the avenue a semi-permanent disaster area for merchants along its length. When completed, the Sixth Avenue Line would be hailed as the most advanced subway in the world, but for now it was preparing to create a host of difficulties on top of those already generated by the seemingly endless Depression.

To a Better Address

Coin dealers, like all others engaged in business in New York City, knew the importance of a fashionable address. The Stack brothers realized by 1934 that the trends as well as their own success and expansion mandated an uptown location for a higher image business. Earlier dealers had experienced similar movement. For example, Thomas L. Elder first did business at 32 East 23rd Street in 1904, shifting to 21 West 35th Street in 1919, crossing Fifth Avenue to 9 East 35th in 1924 and making his last in-town move to 8 to 10 West 37th Street in 1927.

Wayte Raymond started out in 1912 as the United States Coin Company at 200 Fifth Avenue, later moving to 489 Park Avenue and then taking over the numismatic department of Scott Stamp & Coin Company at 1 West 47th Street in the early 1930s. Raymond’s last New York offices were located at 654 Madison Avenue.