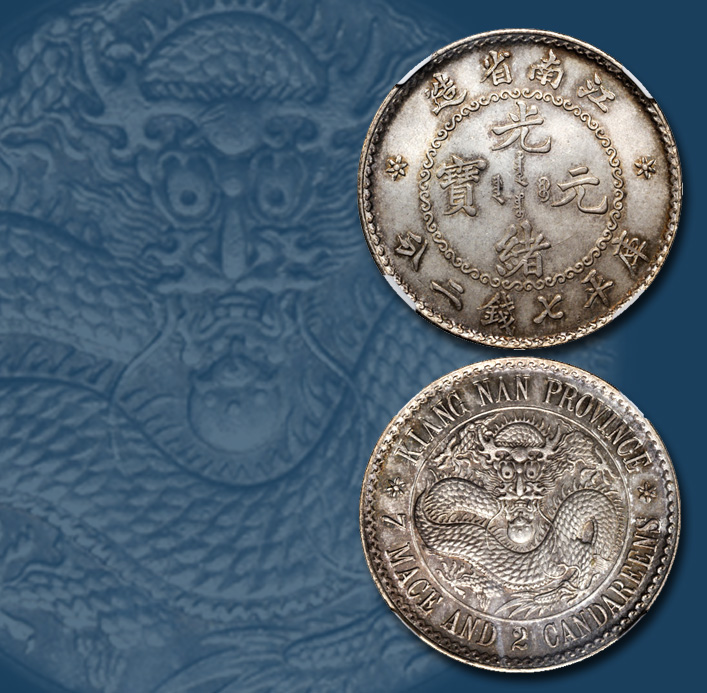 by Stack's Bowers Galleries
World Coin of the Week
The dragon has been an iconic staple in numismatics for centuries, and appears in varying forms, from St. George slaying the western style dragon to the eastern style dragon featured in Chinese numismatics. The long and winding snake-like eastern style dragon is a prominent feature of the provincial issues from China, which routinely astound at the Hong Kong auctions. The forthcoming August Hong Kong show will contain a multitude of rarities and interesting types. This week Stack’s Bowers and Ponterio is proud to preview an iconic piece of Chinese numismatics, the “Old Kiangnan” Dollar.

The province of Kiangnan originally comprised the Anhwei and Kiangsu provinces, but by the time this piece was minted in 1897 the separation had already occurred. The name Kiangnan translates to “South of the river” and refers to the Yangtze. The largest mint for this period was located in the capital of Nanking. The coins from this series were inscribed with “Made in Kiangnan Province” to differentiate them from the copper pieces from Kiangsu province. This coin represents the first Crown sized silver piece from Kiangnan and the Nanking mint, which produced a large portion of silver and copper money. The Birmingham mint supplied the Nanking mint with the necessary equipment and designed the dies for this series. The Birmingham mint produced a sample of coins from the dies they created for Nanking, and these pieces feature proof-like surfaces, a plain edge, and a complete “Sheng” Chinese character on the obverse. When the dies arrived in Nanking, the Chinese minted a series of coins with a varying styled edge and with a complete “Sheng” character as well. Early on, the “Sheng” character on the die for the dollar coin broke, leading to the usually seen “broken Sheng” issues. The coin featured here is from this last series and its border is ornamental.

Generally, this coin follows the established pattern for provincial issues but with some notable exceptions. The obverse contains the usual informative Chinese inscriptions; along the top border it reads “Made in Kiangnan Province.” As mentioned above, the second character (Sheng) of this upper inscription is missing a stroke due to a die break early in the minting series. The lower border inscription describes the denomination, in this case “7 Mace and 2 Candareen (Dollar).” The upper and lower inscriptions are separated by six pointed stars. The inner legend contains a larger Chinese and smaller Manchu inscription that describes the coin in general terms: “Valuable Coin of the Kuang Hsu (regime).” The noticeable variations for the obverse of this type are the two distinct borders. The first is the far outer edge, which features a crenulated pattern akin to a pattern of waves crashing right. The inner border that separates the outer ring from the inner legend is an alternating chain pattern of capital “S” figures. These features set this piece apart from varied other provincial issues.

The most significant feature of this coin is the stylization of the dragon on the reverse. This type has been identified as the “Old Kiangnan” style. The outer border contains the English legend that mirrors the Chinese obverse: “Kiangnan Province” at the top and “7 Mace and 2 Candareens” along the bottom. The upper English legend helps to identify this series as well — in the first “A” in Kiangnan the cross-stroke is barely visible. These borders are separated by a six-pointed star that is similar to the obverse. A linear ring contains the image of an eastern styled dragon, wound up in a wide “S” shape, with a large head. This dragon is also releasing a fiery pearl from his mouth, congruent with the provincial style. The enormous eyes of the dragon seem to stare intensely out at the observer, and make for a truly memorable coin. This nicely toned piece is NGC certified Mint State-62 and is very attractive for the type.

Look for this and other Asian numismatic rarities in our upcoming August Hong Kong Sale. Preview this impressive coin along with the rest of our auction this August at the Stack’s Bowers and Ponterio office located in Irvine California. For details please refer to the Auction Schedule/Details link under Current Auctions at www.StacksBowers.com. To schedule an appointment, please call 800.566.2580.