Oxford Mint Pound of Charles I 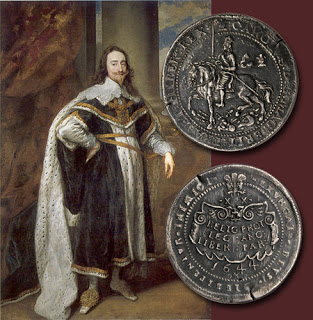 by Todd McKenna
World Coin of the Week
Our world coin this week was born out of the British monarchy’s greatest homegrown crisis, the English Civil Wars of 1642-45 and 1648-49. During the reign of Charles I a number of factors put strain on the relationship between the King and Parliament. The King’s marriage to a Roman Catholic, failure in wars with Spain and France, the levying of taxes without the consent of Parliament and the use of antiquated laws to fine individuals led to revolts from both the Scots and the Irish, as well as estranging the King from main factions in Parliament. One of the final blows before the start of the war was Charles’ attempted arrest of five members of the House of Commons, actually entering the House by force with an armed guard. After this failed arrest attempt, Parliament seized control of London and Charles marched north to raise an army against them, eventually controlling the west and north of England having set up his court at Oxford in October of 1642 where this coin was later minted.

While assembled in Wellington before one of the first battles of the war, the King made what became known as the “Wellington Declaration” wherein he declared he would uphold “the Protestant Religion, the Laws of England and the Liberty of Parliament”. This slogan was afterward given a Latin abbreviation which was added to the design of several of his coins including the Pound of 1644, which displays it on the reverse in a wide cartouche with fine scroll work at the top, surmounted by a banded plume mint mark. On the obverse we see Charles astride a muscular war horse which is trampling arms and armor below. This equestrian warrior image is prevalent in much of Charles’ coinage and was meant to inspire as many of his subjects as possible. However his cause was all but lost by 1645 in the face of the Parliamentarians’ New Model Army under Sir Thomas Fairfax and Oliver Cromwell. While seeking assistance from a Scottish army in Nottinghamshire he was handed over to Parliament only to broker a secret deal with the Scots leading to the Second Civil War where he was once again defeated. This time he was tried, convicted and executed.

From this tumultuous period we offer a rare finely crafted Pound from Charles’ mint at Oxford. A rarity in and of itself, it is made even more striking and desirable by its full legends and well struck designs. The coin has dark toning making for gleaming inky fields, which attractively contrast against the lighter raised portions in the devices. This lovely piece of British history will be featured in Stack’s Bowers Galleries’ upcoming auction at the August ANA Convention in Philadelphia and should not be missed.