The Ship Of GOld 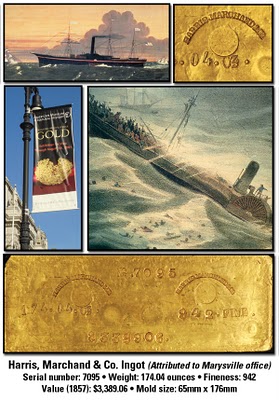 by Q. David Bowers
From the Desk of Q. David Bowers
Welcome to the latest iteration of “From Dave’s Desk.” This is a continuation of my column earlier published by Stack’s. Each month I’ll be commenting on things that inspire, interest, or annoy me or otherwise attract my attention. As ever, your comments are invited. I can be reached at my private e-mail at [email protected]

The rare coin market continues to be very strong. In August, as official auctioneer of the World’s Fair of Money (American Numismatic Association summer convention), we sold at auction over $40 million in coins, tokens, medals, and paper money, followed a few days later by $17 million at our Hong Kong auction. We have more bidders than ever before, with the vast majority now bidding in real time on the Internet. If you haven’t tried this, you are in for a treat. With a catalog at your side (so you can read details, history, and the like) and with the sale in progress on the screen, you can hit the “Bid” button and be a part of the action.

Way back in the summer of 2000 at the ANA Convention the “Ship of Gold” exhibit greeted visitors to the bourse, in time attracting over 20,000 visitors. This consisted of a wide “show front” with a representation of the Kellogg & Humbert Assay Office at the left of the main attraction, the “side” of the treasure ship S.S. Central America. Tommy Thompson and Bob Evans, discoverers of the vast Central America treasure, were on hand to meet and greet visitors, as was Dwight Manley, captain of the California Gold Marketing Group which was preparing to offer gold coins and ingots for sale. It was a unique display, and in my photograph archives I have pictures of many attendees, ranging numismatically from (the late) John J. Ford, Jr., to my fine friend Eric P. Newman (a centenarian as of May 2011). A good time was had by all, as they say!

In the meantime, I was immersed in creating the book, A California Gold Rush History Featuring the Treasure from the S.S. Central America, the title for which was suggested by Eric Newman after he read the manuscript. Upon publication the book turned out to weigh 11 pounds. About 4,000 copies were printed, all of which are sold. Every now and again a used copy comes up for sale on the aftermarket.

As a reward or honor, the California Gold Marketing Group offered me first chance to buy any one of the more than 400 treasure ingots that were soon to be offered for sale. I picked out one by Harris & Marchand, a “rare” assayer for which only a few dozen ingots had been found—including this, the only one with two hallmarks, and with lettering slightly different than the other Harris & Marchand bars. The assayers had their main office in Sacramento and a branch in Marysville. We attributed this unique ingot to Marysville.

This and the other ingots attracted a lot of attention, including a section (illustrating this unique ingot) in the Guide Book of United States Coins. A request was made to Dwight Manley to have this and other Central America ingots and gold coins go on a world tour. This lasted six years and included items of gold contributed by various museums and societies. I had a chance to see it, titled GOLD!, when it was on view for about a half year at the American Museum of Natural History in New York City. Colorful banners were put up alongside the west side of Central Park. The exhibit itself was wonderful and at the end even included a gift shop with souvenirs ranging from mugs to jewelry to T-shirts. I wrote an article about it for the American Numismatic Society’s magazine.

Dwight Manley, who had arranged the sale of the unique Harris & Marchand Marysville ingot, became nostalgic and asked if he could purchase half interest in it, which I agreed to. In the meantime the collecting of S.S. Central America gold ingots became a passion and a pastime it its own right. Of course, these are all expensive, but on the other hand there are people who collect Ferraris by models and who have multiple homes, etc. I am reminded of such affluence when I read Forbes Life, The Robb Report, or the real estate and “personal” section of the Financial Times.

There were five assayers represented in the S.S. Central America. Two of them each had two offices—Justh & Hunter and also Harris & Marchand. A complete collection consists of one ingot from each of the seven offices. No problem (except for writing a check) for six of the offices, for at least a few dozen exist of each. Then there is the unique Marysville ingot—the Holy Grail. After owning the ingot for more than a decade and having it viewed by millions of people worldwide, the time has come to share it—and let someone else have the pleasure. Dwight and I have placed it with Stack’s Bowers Galleries for sale at a low seven-figure price. Christine Karstedt, who helped with the original California Gold Marketing Group presentations a decade ago and also helped me with the book, is the “point person” for Dwight and me. If you are interested or know someone who might be, contact her at 1-866-811-1804. How often can you buy a numismatic item that is of gold, truly unique, and also world famous?

Changing the drift, if you plan to attend the Whitman Coin & Collectibles Expo at the Baltimore Convention Center in November, track me down and say hello. I can be found at the Stack’s Bowers Galleries bourse table, or at our auction (we are official auctioneers for this dynamic show), or at the Whitman LLC booth. These shows are always fun—with a lot going on. And, Baltimore has always been one of my favorite places to visit (I once lived there as a kid).

My best wishes to you and thanks for being a friend of Stack’s Bowers Galleries.