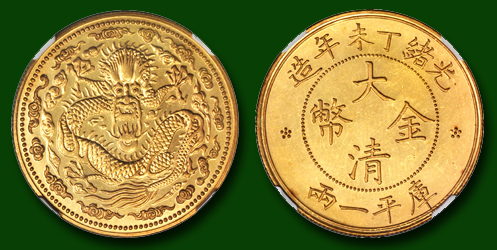 by Stack's Bowers Galleries
World Coin of the Week
The August Hong Kong Asian numismatic and paper currency auction held by Stack’s Bowers and Ponterio already has consigned an impressive array of rare coins. This week’s highlight is a variety of the pattern K’uping Tael struck in gold, and is one of a limited few types of officially minted Chinese imperial gold coins. This coin and similar types never saw circulation production, which led to its high degree of rarity. The pattern K’uping Tael style was minted at the Central Mint at Tientsin (Tianjin) in Chihli province in northeastern China, a region that contains the Eastern end of the Great Wall. This Gold Tael was minted in the 32nd year of the reign of Kuang Hsu (1906), in the year Ping Wu of the sexagenary cycle of dating. Kuang Hsu of the Qing Dynasty ascended to the throne in 1875, with the assistance of his aunt, Empress Dowager Tz’u-hsi. Tz’u-hsi adopted him so she could act as regent until he came of age, effectively ruling from behind the throne. The Chinese government at the time could not support an effective implementation of a gold standard, due in part to insufficient gold reserves. This led to the limited number of these pattern Taels struck in gold and accounts for the small number of gold coins struck overall in China at the time.

A significant feature of this coin is its exclusively Chinese legend — most struck coins of the time contained a partial English legend. The central inscription reads: “Ta Ching Gold Coin” or simply gold coin of great Qing. The top portion of the outer inscription states: “Made (during) the Kuang Hsu (regime) in the Year of Ping Wu (1906)”. Two six-point rosettes situated at the right and left separate the outer inscriptions. The lower inscription contains the weight and denomination: “K’uping 1 Tael”. With the obverse containing all of the logistics, the reverse is available for a stunning artistic rendering, and this Pattern Gold Tael does not disappoint.

There are two varieties of the stunning K’uping Tael type, and this particular coin is the small cloud style. Small spiraling clouds and plum blossoms surround a remarkable dragon in the typical side view, dragon left variety. The fireball issuing from the dragon’s mouth has seven flames trailing. This piece is a reeded edge variety and the absence of a reverse inscription allows for the dragon to dominate the scene. NGC certifies this piece Mint State 62. A pattern Gold Tael of this caliber contains immense value and when the rarity is taken into consideration the significance of this piece sky-rockets. Although not struck for official circulation due to the lack of a gold standard or enough gold reserves, the Chinese government nevertheless succeeded in creating a scarce item of immense historical value.

Look for this and other Asian numismatic rarities in our upcoming August Hong Kong Sale. Preview this impressive coin along with the rest of our auction this August at the Stack’s Bowers and Ponterio office located in Irvine, California. For details please refer to the Auction Schedule/Details link under Current Auctions at www.StacksBowers.com. To schedule an appointment, please call 800.566.2580.