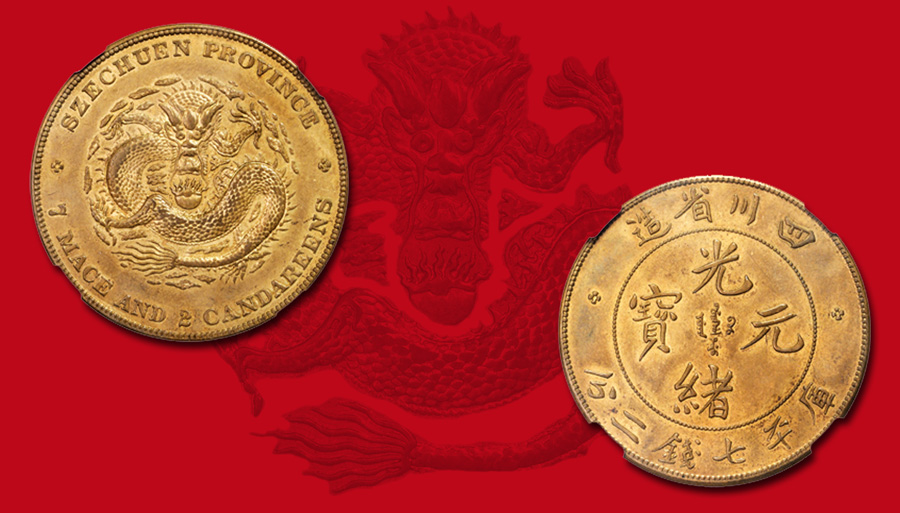 by Chris, Chatigny, Cataloger
World Coin of the Week
China provides yet another fascinating numismatic piece as a preview for Stack’s Bowers and Ponterio upcoming April Hong Kong auction, a very rare pattern coin from the province of Szechuan. The western Chinese province of Szechuan’s mint was located at Chengtu during the Imperial Era. The mint faced several obstacles impeding its opening in 1897 and the beginning of operations in 1898. An American company, Ferracute Machine Company of Bridgeton, New Jersey, supplied the Chinese government with materials, machinery, and experts to begin minting coinage. Ferracute sent Henry Janvier to oversee the installation and launch the mint. Janvier’s trip to China from New Jersey would span months, as he traveled by train across the U.S., sailed from San Francisco to Japan (narrowly avoiding a typhoon), then another boat to Shanghai. Here Janvier picked up a crew, an interpreter, and a bull terrier. The party traveled up the Yangtze River, then overland until they reached Chengtu nearly three months after leaving New Jersey. Janvier then spent months preparing the location and machinery for operation, against many setbacks including thieves, floods, and corrupt officials. However, Janvier finally opened the mint and returned to New Jersey by way of Europe, with letters, photos, and a new wealth of experiences. Henry Janvier would go on to become Vice President of Ferracute, and retire in 1943 at eighty-two.

Ferracute Machine Company struck a limited number of pattern pieces for the Szechuan province at their New Jersey factory. These sets were struck in brass, and were nearly exact copies of the Kwangtung provincial pieces except for the province name. Two complete sets reside in museums today, one at the National Museum of China in Beijing, and the other in the Philadelphia Mint Museum. Ferracute also produced sets in aluminum and pewter as well. These rare pieces were minted in a limited quantity, and their off-metal trait further adds to their scarcity. This Dollar piece struck in brass is believed to have been minted in 1897. The obverse depicts the “standard” pattern for provincial issues, which include: “Kuang Hsu Yuan Pao” (Emperor Kuang Hsu and “valuable coin”) dominating the center, with smaller Manchu inscriptions in the exact center. The upper portion of the border contains characters stating “Szechuan Province”. The lower portion characters depict the denomination (weight). The Chinese provincial dollars weighed seven Mace and two Candareen which is based off of .72 K’uping Taels. Two small four-point rosettes divide the upper and lower legends.

The reverse of the coin is the fearsome dragon emblem now iconic with Chinese Imperial issues. The dragon’s head is situated just above center, with its body wrapping around behind it in an “S” shape. The dragon is surrounded by clouds on all sides and projects a fireball towards the center. The reverse legend appears in English, the top portion is Szechuan Province and the lower states “7 Mace 2 Candareens”. An interesting feature about the lower legend is the style of the numeral “2”. The style is indicative of engraving in the United States, instead of a Chinese engraver. This detail helps place the minting location to the New Jersey factory as well. These legends are separated by small four point rosettes similar to the obverse. This incredible pattern Dollar in brass was engraved by none other than Charles E. Barber, the sixth chief engraver for the United States Mint at Philadelphia. Barber was hired with a private contract and he used a Kwangtung piece as a model, as mentioned above. This piece sports a highly attractive luster around the devices. The rare Szechuan pattern Dollar in brass is rich in history and when combined with the infrequent off-metal aspect the rarity and value of this piece soars.

Look for this and other Asian numismatic rarities in our upcoming April Hong Kong Sale. Preview this impressive coin along with the rest of our auction this March at the Stack’s Bowers and Ponterio office located in Irvine California. For details please refer to the Auction Schedule/Details link under Current Auctions at www.StacksBowers.com. To schedule an appointment, please call 800.458.4646.