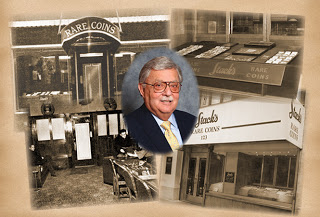 by Harvey G. Stack
Harvey G. Stack Remembers
In 1933, when brothers Morton and Joseph B. Stack decided to open in what was then mid town New York, 6th Avenue and 22nd Street, they created a plan to enhance the ambiance of a coin shop.

The relatively few dealers then in New York City had offices upstairs in office buildings, requiring an elevator ride or a walk up a few flights of steps and stand-up jewelers-type show cases to view. The Stacks decided that this was not the way to greet clients, so they decided on a street level location, in a well-traveled area of the city, to make visitors feel welcome and comfortable.

The major innovation were showcases, served by comfortable chairs, where collectors could sit, look at and study coins or other items and chat with those behind the counter about numismatics. The walls were brown oak paneling, the furniture was of similar wood, and the decorations were of numismatic displays—currency, coin plaques, decorative medals, bookshelves and numismatic related documents. It was like a small museum to attract visitors who would feel the warmth of the Shop. Near the front entrance was a couch for clients to wait if the counters were busy.

The family, over the next decade employed or had working for them on a contract basis, some of the greatest numismatists in the New York area, including Hans Holzer, Edward May, James C. Risk, Henry Grunthal, Fred Knobloch, and John J. Ford, Jr., to mention but a few. These numismatists were available, along with members of the Stack family, to help customers, catalog items, and develop friendships that prevailed for decades.

Even collectors who visited contributed to the strength of Stack’s cataloging. Such great numismatists as Howard Newcomb, William Sheldon, Harold Bareford, Joseph Spray, Ray Gallo, Oscar Schilkee, Otto Skia, Martin Kortjohn and others too numerous to mention, became part of the team as the firm developed. Great collectors of the period, such as Col. E.H.R. Green, James A. Stack, Clifford Weihman and many others, sat with the staff, discussed coins and developed their collections.

The Shop was considered by all these people a ‘CLUB HOUSE ‘, a place to gather, meet other collectors and the extensive staff of Stack’s, discuss, collect and learn about numismatics. Being on the street level provided the perfect place for gatherings, and through the gracious reception, warm ambiance and friendships made, the firm of Stacks continued to grow.

As the economic environment in the city changed, with great and important shops opening, Stacks followed and changed its location several times in the years before 1953, when the present and long standing shop was opened at 123 West 57th Street—a main street for art and fine shops. From our 6th Avenue location we moved to 32 W. 46th Street, a few steps from 5th Avenue, and after World War II we were given the opportunity to purchase a building, even closer to Fifth Avenue, at 12 West 46th Street. We stayed there, until the neighborhood started to change (with discount stores opening up and down the street) to our present location where we have remained for almost 60 years.

To those of you who are not familiar with the area, we have the famous Carnegie Hall on one corner, the United Artist building on another corner, The Directors Guild of America across the street, Steinway Hall next door, and the famous Russian Tea Room across the street. Not a bad location for visitors to come to.

Throughout our moves, the design by the original Stacks brothers was maintained—the wooden walls and ambiance remained the same, but it was freshened up, with upgraded furniture, various types of wall displays and exhibits, and an extensive array of coins for sale in the showcases in the windows on the street.

Our displays were so extensive that some buyers wanted to buy what was on the walls, items that, according to the policy of the earlier Stacks, were for display and not for sale. Imagine we had five different Fractional Currency shields, (including three different background colors), bronze busts of Washington, Lincoln, Grant, and General Sherman, all life size on the shelves. There was a superb marble Greco-Roman Bust on a pedestal at the entranceway, (which was considered by Cornelius Vermeule, curator of the Boston Museum of Fine Arts, as the model used by Charles Barber, for the famous Liberty Head nickel) and numerous other artifacts from ancient to modern times to be seen by our visitors. Following the earlier plans set forth by the brothers, “if the item is at eye level or higher, it is for display and not for sale”

Now, Stack’s Bowers is refurbishing and redecorating the store (or shop to some). The walls will be redone, the counters refinished, the carpet replaced, the lighting changed, the entrance enhanced, the
show windows re-designed, the air conditioning re-done— all things that will make the store continue to be inviting and attractive to visitors.

This project will take some time, and we plan to keep you updated as progress is made. In the meantime, the store will be open as usual, and one of the two entrances will be available when you visit.

We are pleased to be able to maintain our shop in such a wonderful part of New York City and be able to continue the landmark status we have had for so many decades.