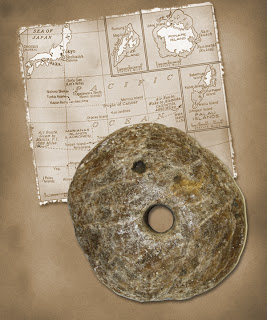 by Kent Ponterio
World Coin of the Week
The stone money of the Yap Island could never be classified as “pocket change.” In fact, the largest examples are over 12 feet in diameter and weigh about two tons. In our 2012 New York International Numismatic Convention auction, January 6, 7, and 9, we are pleased to offer a 54-pound, 18 x 3.5 inch Yap Island “Fei.” These stones are seldom seen on the numismatic market and have been called the “Holy Grail” of primitive money collecting.
Considered sacred among local people, Yap Island stone money was not easy to make or to transport. As there is no large source of stone on Yap, the calcite stones were quarried and shaped on the Island of Malakal, in Palau, using axes made of clam shells, and then shipped on native boats to Yap. The overseas trip could be very dangerous, and often the value of a stone was directly related to the number of human lives lost in its quarrying and delivery. Although ownership of a stone was traded, often the stone itself would not be relocated as the size and weight made actual transfer of the item impractical.
Although there are many sizes and shapes of Yap stones, they can be classified into two basic types pre and post O’Keefe. The earliest stones were produced by locals using axe heads made from shells of giant clams. Later stones or “O’Keefe stones” were produced in the 1800s using metal tools. David O’Keefe was an American of Irish heritage who came to Yap with tools and a junk boat acquired in Hong Kong which he used to quarry and transport “Fei” from Malakal to Yap. Through this process he set himself up as the King of Yap Island. The 1954 motion picture “His Majesty O’Keefe” starring Burt Lancaster (although somewhat dramatized), fairly accurately portrays this series of events.
The stone we offer in our January New York City sale (Opitz-pg.316/21; Quiggin-pg.144, pl#12; Sigler-pg,19; Gillilland-Smithsonian Institute “The Stone Money of Yap a Numismatic Survey”-pg.58-type-d) is of the pre O’Keefe type, quarried and shaped by the native Yapese using the traditional axes made from giant clam shells. Seldom are larger stones available for sale, as removing them from the island was extremely hard due to their size and weight. In terms of condition this stone is complete, unbroken and attractive.