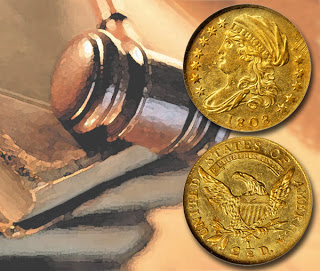 by James Matthews
United States Coin of the Week
The quarter eagle of 1808 is recognized today as a great rarity, a landmark among major design types. Just 2,710 quarter eagles were made of this date, the first (and last) year that John Reich’s Capped Bust to left design was used on this denomination, creating a one year only type required for a complete type set of United States coins. As chance would have it, in the following years, no depositors requested that their bullion be coined into quarter eagles. Because of this, no quarter eagles were struck at the Philadelphia Mint until 1821 and this later mintage featured the modified Capped Head design, which had been in use on the gold half eagle since 1813. Adding to this issue’s scarcity is the fact that as time went on, the price of gold rose to such an extent that these quarter eagles struck from 1796 through 1834 became worth more in scrap metal value than face value. In 1834 the weight of the quarter eagle and the half eagle were reduced so that melting them was no longer profitable and these gold denominations could circulate once more.

John Reich, a German immigrant, had been recommended to Mint Director Elias Boudinot in 1801 by President Thomas Jefferson who had seen examples of the engraver’s work. He was employed at the Philadelphia Mint on a part-time basis through 1807, when then director Robert Patterson recommended that Reich be given a more permanent position, partly to replace the aging Chief Engraver Robert Scot. In a March 25, 1807 letter to Jefferson encouraging more permanent employment for Reich, Patterson states, “the beauty of our coins would be greatly improved by the assistance of [Reich’s] masterful hand.” Indeed, in 1807 Reich prepared new dies for the half dollar and half eagle which featured the Capped Bust to Left motif. These seemed to find favor and the design would be adapted the next year on quarter eagles and subsequently in modified form on other denominations as well.

The example offered as part of the Stack’s Bowers Galleries official auction of the Whitman Coin and Collectibles Baltimore Expo in November is graded MS-61 by NGC. The bright yellow gold surfaces are lustrous and attractive, with just traces of copper toning on the high points and a swath through the lower left reverse. There are only minimal signs of bag handling and typical adjustment marks on the obverse rim. The strike is reasonably sharp for this rare type, with full separation of Liberty’s curls and just a trace of softness on the uppermost areas and on the dentils in areas opposite the adjustment marks. The usual light die crack can be seen from the cap to stars on the right.

Because of its extreme rarity and also its position in a gold series in which just about all dates and mints are rare, the 1808 quarter eagle is not as famous as it should be, although it is well enough known to specialists and advanced type collectors. Of the original mintage, 125 to 150 are estimated to exist today, the majority of which are found in circulated grades. Mint State examples are virtually unobtainable and demand always far outstrips the number of coins that come on the market.

More information about this quarter eagle rarity and the other important coins, tokens, medals and paper money in the Stack’s Bowers Galleries November Baltimore auction will be available in our upcoming catalog, as well as on our website www.stacksbowers.com.