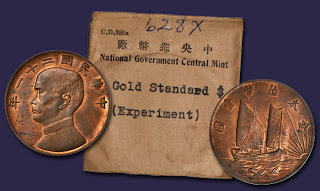 by Todd McKenna
World Coin of the Week
This week’s spotlight coin is a rarity from the Republic of China which will be featured in Stack’s Bowers & Ponterio’s August auction in Hong Kong. The unadopted Gold Standard Dollar gives testament to China’s struggles to find a workable financial policy in the decades following the 1911 Revolution and the ensuing travails during the drive towards full unification. In an effort to find this elusive solution the Nanking Government invited foreign economists to give a detailed report on the state of Chinese finances and offer recommendations on policy change and fiscal structure. This overview was known as the Kemmerer Report and advocated the gradual introduction of coins issued on the gold standard with the design similar to the all ready circulating Sun Yat-sen “Junk” Dollars with the monetary unit and its fractions known as “1 Sun, 1/2 Sun, etc”. Dies were ordered from the United States with a few trial pieces being struck there and another small run of trial pieces struck at the Central Mint in Shanghai, some in silver and some in copper like the one we present here.

The commission brought in by the Nanking Government was headed by world renowned “Money Doctor” Professor Edwin Kemmerer. In the early 1900s Kemmerer had been appointed as the Financial Advisor to the United States Philippine Commission and, as an outspoken advocate and ardent defender of the gold standard, he developed the plan which placed the Philippine monetary system under it. Throughout the 1910s and 1920s Kemmerer worked alternately as a professor at Cornell and Princeton and as an economic advisor to several countries, predominantly in Central and South America. Eventually he became the leader of advisory commissions which allowed for much more in depth analysis and recommendation, as in the case of the Kemmerer Commission, which was summoned to China in the autumn of 1929 and did not deliver its final report until late autumn of 1930. This report was not released to the public until May of the following year, after which the order for dies and trials were placed.

The U.S. Mint at Philadelphia was contracted to produce the dies for the proposed “Sun” units which maintained the overall appearance of the concurrent “Birds Over Junk” Dollars with modifications to the Reverse design. Prepared by then Chief Engraver John Sinnock, the modified design has moved the three geese from soaring over the junk to skimming along the water just below it. This modification may coincide with the removal of the geese altogether from the design of the regular Dollars of 1933 as according to Kann, “…Because the rising sun might have been confounded with the national emblem of Japan, and the wild geese likened to oncoming Japanese warplanes.” Additionally a legend was added stating, “Gold Standard Currency One Dollar” in place of the simple denomination, “One Yuan”. The subsequent fractional “Suns” share these design elements with, of course, the appropriate changes to the denominations. Once the dies were prepared, a small trial run of pieces were struck and, along with the dies, were shipped to Shanghai where famed mechanical engineer Clifford Hewitt had established a new modern mint, having been under contract by the Chinese government since 1920 following the opening of the Manila Mint which he helped set up.

It was here at Shanghai that the coin we present was struck in copper as a trial piece for review and approval as is evidenced by the mint envelope accompanying the coin which reads, “National Government Central Mint”. It is identical to the example from Mr. Shi Jiagan’s Collection (#613) which is housed in the Shanghai Museum. Still maintaining luster in the protected areas and showing few signs of handling or wear, this piece is a wondrous rarity of type and condition and more than lives up to its PCGS grade of SP63. As the gold standard project never came to fruition, this type did not see full production and the few pieces which exist have been coveted numismatic rarities practically since they were struck. This coin will be offered in Stack’s Bowers & Ponterio’s August Hong Kong auction and is surely to be a top highlight of the catalog.