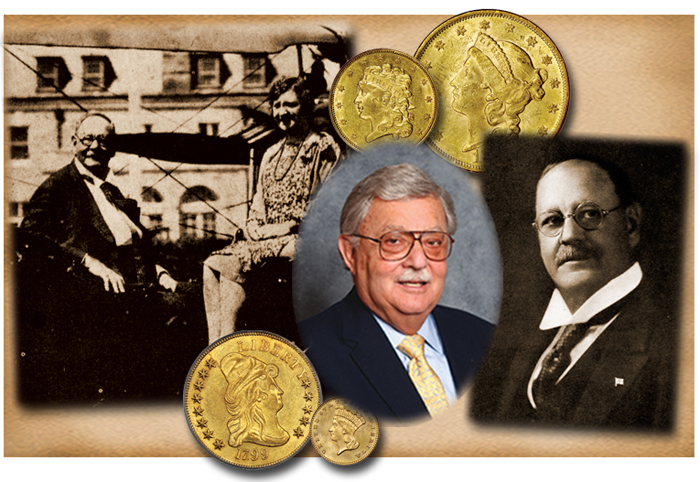 by Stack's Bowers Galleries
Harvey G. Stack Remembers
Almost from some seven decades ago until today, I have met many collectors, authors, professionals of all types, a president of the United States, a secretary of the Treasury, senators and congressman, entertainers and other famous people who visited Stack’s, at one time or another (or some as often as once a week).

I began my apprenticeship at Stack’s while I was still in Public School, and was trained in numismatics by two great teachers, my father, Morton, and my Uncle Joe. My job included sweeping the shop, putting coins in envelopes, learning to grade, knowing rare coins from common ones, cataloging and preparing auction catalogs or price lists, and serving those who visited and tried to teach me numismatics. I had an unique opportunity to develop skills, which I am still able to use today. All the other Stacks — Ben, Norman and Larry — at different periods had the same opportunity to develop and that helped make our entire numismatic business a leader in the field.

The Stack family devoted their business strictly to numismatics in 1933, and very quickly developed into an outstanding rare coin shop. In 1936, during one of the Saturdays I had off from school, I was working at our shop on 6th Avenue (currently called ‘The Avenue of the Americas”). I was amazed to see a large Rolls Royce, chauffeur driven, stop in front of our shop. The chauffeur got out and quickly opened the door where the passenger was sitting. The car had a very high ceiling, (had to be custom built) and the passenger got out. He was a very tall man, about 6 feet 4 inches tall, and quite large (I learned later that he weighed close to 300 pounds). He was immaculately dressed, with a high hat on his head, and walked with the help of a cane.

My seniors told me that Col. E.H.R. Green was coming to visit. Col. Green, born as Edward Howland Robinson Green, had a full size cork false leg, but walked upright and smartly. I learned that he had his leg amputated after a severe infection when he was a young man. He was the son of the famous woman financer, Hetty Green, probably the richest lady in America (during her lifetime). She was so strict and demanding that she had the title of “ the Witch of Wall Street.” She dressed in very provincial black dresses, and frightened all who dealt with her. At the time of her death in 1916 she was said to be worth well over $100 million and probably much more — those millions were like today’s billions.

Her son acquired the title of Colonel by being on the staff of the governor of Texas in 1910 and kept the title from that point on. He was a spendthrift, having inherited some 50% of his mother’s estate, and indulged in luxuries, including woman and partying and various areas of collecting. He had a super world class stamp collection, which competed in completeness and rarity with the famous royalty collections of the period. He also loved gold coins, and he accumulated many early American coins, especially U.S. $5 gold, 1795 – 1834, and $10 gold, 1795 to 1804, as well as much of several full series of the dates that followed. He had stores of $20 gold, several collections of $1, $2.50 , $3 and $4 gold, besides a very large holding of foreign gold coins. As the Gold Act of 1933-1934 exempted the rarities of the gold series from being seized and melted, he was sure to have enough to prove that his interest and holdings were many, including early dated coins, and popular collectibles. (I could mention he wasn’t the only one who collected gold systematically to qualify as a holder of "rare and unusual," in order to retain gold as part of his wealth.)

So this was the man who was visiting our shop. My father and uncle greeted him, and when he saw me, he asked "who this may be?" My father responded, "He is my son Harvey who is here helping us out and trying to learn the numismatic business." Col. Green shook my hand and said, "My boy, you are lucky to have two teachers like your father and uncle. " "Now," he said, "what do you have for me to look at?" This was his usual greeting and the family was prepared, as usual to serve him. Since Col. Green visited our shop about twice a month, my family set aside new acquisitions and had them displayed in large wooden trays, careful marked and priced to show him what they had assembled.

Col. Green took out a large magnifier and carefully examined each coin. He remarked on those that he thought were beautiful and knew which might be rare and unusual. Whether they were coins of the United States or the rest of the world, he knew about them and commented as he examined the trays. That day there were five trays, each containing 15 or 20 coins. He would count each early $5 and $10 gold, along with the other coins. When he was through he would look up at my father and uncle who were nearby and would ask, "How much do you want for all five trays?" As this wasn’t the first time he had visited, the Stack brothers were prepared to quote a price for the lot. Col. Green, gave the group one more quick look and said "I will take them all." He then turned to the door and summoned in his driver, who came over, picked up the five trays, carried them out of the shop and placed them in the trunk of the waiting Rolls Royce. Col. Green got up, turned to me, said goodbye, then turned to my uncle and father and repeated his “thank you and goodbyes,” and went directly to his car, was helped in by his driver and off he went.

On the following Monday, shortly after the shop opened for business Col. Green’s chauffeur returned with the empty trays and a check for the purchase. The Stack brothers started again that morning to assemble another group for a possible next sale. It was understood that he visited stamp dealers, antique dealers and jewelers in a similar manner. If he liked it he bought it. He also had a fetish for cars, all models and makes, and enjoyed unusual models and designs. He loved to drive them as well, and had them fitted in a special manner so he could drive using his one good leg.

Col. Green, in collecting and hoarding rare gold coins especially early $5 and $10 gold kept many from the melting pot, for he had the funds to buy and hold them. He died in 1936, and the Chase Bank in New York was his executor. Because there was a major lawsuit between his wife (he married late in life) and his sister as to who should benefit from his treasures, his coin collection and stamp collection were not dispersed till the 1940s since there wasn’t a buyer or group available to buy the quantities he had assembled. For example, his $5 and $10 gold were first marketed in 1943 and Stack’s bought them and little else. The cost was high at the time, the market for buyers was small, and many of the coins had to be held for years in order to sell them in orderly fashion. How Stack’s did this is another story which included selling to King Farouk of Egypt, Clifford T. Weihman, James Stack, Gaston DiBello, and J.J. Pittman to mention a few.

The lessons I learned from meeting people and seeing how to deal with them guide me to this very day. Colonel Green was a person one can never forget!