Aureus of Octavian and Julius Caesar 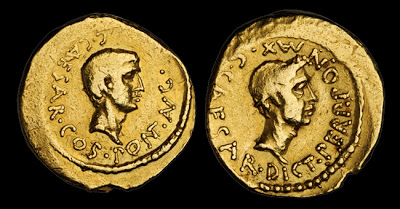 by Kent Ponterio
World Coin of the Week
This week our featured coin from the Robert O. Ebert Collection is an Aureus struck by Octavian Caesar to solidify his succession as the sole ruler of Rome. This coin portrays the two most iconic Romans: Julius Caesar and his heir, the first Emperor Octavian (later Augustus Caesar). Octavian struck this coin in the midst of his meteoric rise to power. Just years before, his great-uncle Julius Caesar staged a coup d’état, twisted the Roman Republic into a form of monarchy and empire, and adopted the young Octavian as his heir. After Caesar’s assassination, Octavian would play the Senate, amass Caesar’s legions to himself, and defeat Caesar’s murderers and even his one-time ally Marc Antony to emerge as the first Emperor of Rome. Octavian had this issue minted in 43 B.C. most likely immediately following the Battle of Mutina (modern day Modena). This battle showed that Octavian was a decisive player in the post-Caesar power struggle.

Octavian had these coins minted while on the march with his armies; this piece was struck in Northern Italy around 43 B.C. As was typical for travelling mints the strike is slightly uneven. Despite this unevenness this example from the Robert O. Ebert Collection is better than most, exhibits full legends and distinct portraits, weighs approximately 8.07 grams and is considered Very Fine. Combining wonderful historical value and incredible beauty, this numismatic piece makes a tremendous addition to any collection.