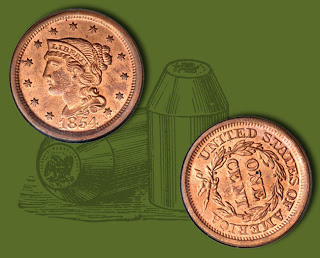 by Q. David Bowers
Answers for the Avid Collector
Question: I have an 1854 large cent (Braided Hair/Coronet) and the reverse is rotated about 250 degrees clockwise or 110 degrees counter-clockwise. I attempted to take a few pictures by marking where the star is above her head straight through where the space is between the 18 and 54 of the date. I have ordered a Rota Flip Rotation Measuring Device so I can get a more accurate measurement.

I have been told it has a rarity of R-5 or R-6 and it seems to be Fine or Very Fine. Do you have any idea how rare it is? How much it might be worth? If you are not able to answer these questions, do you know where I can find the answers? — S.H.P.

Answer: This was caused by the reverse or anvil die becoming loose in the coining press. Among 19th century coins such rotations are scarce in comparison to correctly aligned coins, but there are still many in existence. One particular variety of 1804 half cent exists with the reverse aligned in many different positions, making a nice specialty collection for anyone interested.

Certain Proof coins of 1868, including the cent and $3 gold, can be found with the obverse and reverse misaligned so that they are in the same direction, rather than the standard 180 degrees apart.

With regard to value, it is probably correct to say that collectors who will pay significant premiums for misaligned 19th century coins are scarcer than the coins themselves. However, properly described, your coin should be worth a slight premium. — David Bowers