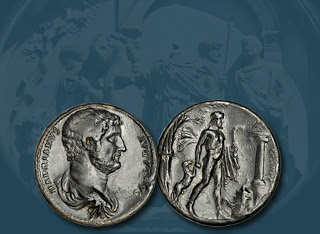 by Chris Chatigny
World Coin of the Week
This week our feature from the Robert O. Ebert Collection is a Bronze Medallion of the Emperor Hadrian (A.D. 117-138). Issues of the Emperor Hadrian are highlights of the Ebert Collection, and this piece stands out as an exceptional example of a rare and important medallion struck in bronze. Hadrian followed his adoptive father Trajan to the position of Roman Emperor, but he did not continue the military campaigns and expansion. Hadrian instead consolidated the territorial gains through diplomatic means. With this relatively less invasion-intensive period of Roman history, Hadrian was left to pursue his own desires; travelling, the arts, and other facets of Greek culture. He enjoyed Greek culture so much that at a young age he earned the nickname “Greekling”.

From a young age one of Hadrian’s passions was hunting. This enthusiasm for hunting conflicted with his military duties as a youth and shortly after that he was ushered into increasingly more important positions and duties. Later as emperor he showed the empire his love for hunting by honoring the deity of the forest Silvanus with this medallion. This medallion is struck in remarkably high relief from dies of exceptional artistic quality. The piece is choice very fine, with an attractive even dark patina with hints of lighter highlights in the devices and protected areas. The full reverse depicts Silvanus, standing facing right, leading a ram in his right hand to a sacrificial altar. The tree, temple, and altar in the background add a tremendous amount of detail to this medallion and bring the scene to life. The inscription around the reverse reads: COS. III. P.P. two of Hadrian’s titles, Consul for the third time and Pater Patriae – father of the country – (respectively).

The obverse continues the tradition of Hadrian’s coinage and depicts Hadrian with a full but closely cropped Greek style beard. The bare-headed draped bust of Hadrian facing right is encircled by an inscription: HADRIANVS AVGVSTVS P.P. this translates to Hadrian “the exalted one” or simply Hadrian the Emperor. The slight natural hairline planchet crack hardly diminishes the value of the piece, nor does the mild unobtrusive smoothing of the fields. This piece is of the utmost rarity, is representative of Hadrian’s pursuits, and its high artistic quality would add to any collection of Hadrian, Roman Imperial, or related interest.

Preview this impressive medallion and the entire Robert O. Ebert Collection January 11-12, 2013, at the Stack’s Bowers and Ponterio Official NYINC Auction, held at The Waldorf-Astoria, New York. Earlier viewings are also available by appointment in Irvine, California or New York City, for details please refer to the Auction Schedule/Details link under Current Auctions at www.StacksBowers.com. To schedule an appointment, please call 800.458.4646 (West Coast) or 800.566.2580 (East Coast).