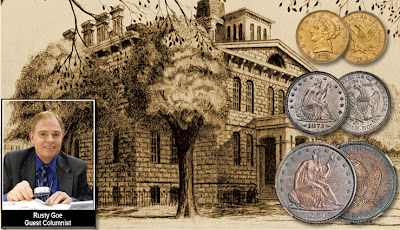 by Rusty Goe
Crossing the Block
Rusty Goe is owner of Southgate Coins in Reno, NV, president of the Carson City Coin Collectors of America, and award-winning author of books about the Carson City Mint and its coins.

Every specimen in the 111-piece Battle Born collection of Carson City coins has a story to tell. The set itself as a whole conveys an impassioned message of persistence, patience, and seized opportunities. Over the next five and half months, leading up to the once-in-a-lifetime auction event on August 9, 2012, many of the stories behind this incomparable assortment of coins from the Carson City Mint will surface in articles in numismatic publications, at coin shows, and on Web sites and in discussion forums across the Internet. The Chinese will celebrate the Year of the Dragon in 2012; numismatists will remember 2012 as the Year of the Carson City coin.

The first memorable story that put a twinkle in the Battle Born collector’s eye is the one about how in late 1994 he obtained the first significant coin for his set. Someone from Carson City, NV found a shiny 1870-CC $5 gold piece in the ground while walking along a dusty, unpaved path. He sold it to a local dealer, who in turn submitted it to PCGS, whose graders gave it an MS-61 condition rating, which established it for all time as one of the finest known examples of this elusive date. Mr. Battle Born, never having bought a coin as expensive as this, seized the opportunity and added it to his fledging collection. From then on, the half eagle series ($5 gold pieces) always held a special place in the Battle Born collector’s heart.

I met Mr. Battle Born in early 2001, about six and a half years after his purchase of that remarkable 1870-CC half eagle. His collection had progressed considerably since 1994 and I saw great promise in it. Because of some of the scarcer coins in the set and from what he told me about his collection, I assumed that he had certain date-denomination combinations. My presumptuous nature led to some memorable surprises, one of which is the subject of this next coin’s interesting story.

One day, I met with the Battle Born collector to talk about coins. I presented a strategy to him about how we could replace a few of the lower-quality pieces in his set with some higher-grade examples I had recently bought. While focusing on those coins, I just happened to pull one of the favorite pieces in my inventory from my shirt pocket: the Eliasberg 1873-CC With Arrows quarter, graded MS-64 by PCGS. I knew Mr. Battle Born owned the Norweb 1873-CC Without Arrows quarter, also graded MS-64 by PCGS, and I just assumed he must have had a With Arrows example of that same date and denomination. My mistake. He looked at my With Arrows quarter and asked “How much do you want for it?” Somewhat startled, I said, “You don’t have an example of this date and variety?” Although I hadn’t planned on selling that quarter that day, I quoted him a price and he bought it, thus giving him a great match to his Without Arrows counterpart. From that moment on, I made it a point to get a detailed list of the coins in his holdings.

One date-denomination I knew he had was the 1870-CC half dollar. Around that time, in late-2001/early-2002, I knew it would be difficult to upgrade the AU-50 specimen he had that was certified by PCGS, especially since there were no Mint State specimens graded at that time by PCGS or NGC. In October 2002, an opportunity arose to buy what would surely become the first Mint State 1870-CC half dollar certified by a major third-party grading service. I flew to New York to buy the piece in a Stack’s auction. Unfortunately, I did not anticipate there being another participant at the sale who valued the coin more than I did. After an aggressive bidding battle, I accepted defeat and conceded the half dollar to Eugene Gardner, who paid a record price of $161,000 for it.

Three years passed and no other Mint State examples of an 1870-CC half dollar hit the market. Finally, NGC graded the Pryor specimen MS-62. Bowers and Merena had sold this attractive 1870-CC half dollar, with Prooflike surfaces covered with multi-colored toning, in its January 1996 auction. For some reason, possibly the light hairlines visible on the coin’s surfaces, it initially did not meet PCGS’s or NGC’s standards for a Mint State grade. After NGC sealed it in an MS-62 holder, its owner consigned it to a January 2005 American Numismatic Rarities (Q. David Bowers and Chris Karstedt) auction. I wanted to buy it but there were many other important Carson City coin rarities in the sale on which I placed a higher priority; so unfortunately, because of budgetary constraints, I missed out on the 1870-CC half dollar.

Six and a half years later, Stack’s Bowers offered that same 1870-CC as part of the Dick Osburn Liberty Seated half dollar collection, in its 2011 Chicago ANA auction. This time, the coin returned to Nevada after I won it in the sale for $172,500. I felt gratified to place it in the Battle Born collection, nearly nine years after my failed attempt in 2002 to add a Mint State 1870-CC half dollar to the set.

Stories abound about the coins in the Battle Born collection: about the circumstances under which they were made, the historical and socioeconomic environments in which they surfaced, and the accession of them into the world-class set. Although the Battle Born collection will cease to exist on the evening of August 9, 2012, the stories about its individual pieces will never end.

Following in the tradition of some of the most memorable auctions in history—Anderson Dupont, Empire, R. L. Miles, Garrett, Norweb, Eliasberg, Bass, and Ford—Stack’s Bowers will produce a catalog that will showcase many of the stories behind the coins in the one-of-a-kind Battle Born collection. When the time came to offer this outstanding set, I chose Stack’s Bowers as the auctioneer because of the reputation and remarkable track record of the company’s Chairman Emeritus, Q. David Bowers, for selling such noteworthy collections. It helped that he, as well as the Stack’s brand, had presented many of the rarities in the set in past auctions. The company is blessed with a first-rate marketing team, has a seasoned staff of catalogers, and will conduct the sale in one of the most historic locations for coins in America, Philadelphia.

After the last coin crosses the auction block at the Stack’s Bowers sale in the City of Brotherly Love on August 9, 2012, more stories will be forthcoming as new owners of pieces from the Battle Born collection discover the joys of adding them to their holdings. If you can, please plan on attending the event in Philadelphia. At the very least order a copy of the auction catalog, so you can have your own copy of a storybook about the enchanting Kingdom of Carson City coins.