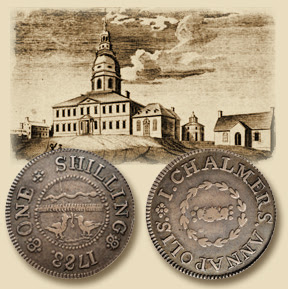 In 1783, Annapolis, Maryland gold and silversmith Captain John Chalmers (1750-1817), one-time Continental Army recruiting officer and Sherriff of Baltimore, produced a series of silver coins in the denominations of threepence, sixpence and shilling, with several die varieties now known to today’s collectors, some of which are extremely rare. Many, if not all, of the dies were produced and cut by Thomas Sparrow, who is also known for his work on the paper money plates of the Maryland Colony. Chalmers may also have been responsible for some of the dies, as he was a talented silversmith and no stranger to finely detailed engraving. The coins were produced in a wooden building at Fleet and Cornhill streets in Annapolis.

The design of the shilling type to be offered in our upcoming November Baltimore Auction is attractive in its simplicity. A pair of clasped hands at the center of a wreath composed of 12 tri-tipped leaf groups is encircled by I. CHALMERS ANNAPOLIS on one side, while the other side depicts a pair of birds tussling over a worm beneath a hedgerow and a snake, all in a beaded circle with ONE SHILLING 1783 around the circle. An earlier and extremely rare shilling design features a circle of 12 separate rings with a 13th ring at the center on one side, and with a star within each of the outer 12 rings, the 13th star at the center near a Liberty cap on pole motif. The other side features I. CHALMERS ANNAPOLIS 1783 around the legend EQUAL TO ONE SHI above a pair of clasped hands.

The upcoming November sale’s Chalmers shilling, weighing 58.9 grains, has been described by our cataloger in part as: “A pleasing steel-gray specimen…the devices are fairly crisp for the grade, and remarkably so for an example of this very challenging type, especially so on the ‘bird’ side, while the central clasped-hands design on the opposite side shows substantial detail. The present piece, ex: Richard Picker, is undeniably choice for the grade…” We can vouch for the in-hand quality as well as the accuracy of the cataloger’s description and the PCGS grade. The overall quality invites brisk auction activity, so we caution that bidding on this particular 1783 Chalmers Shilling will not be for the timid or faint of heart.

Our November Baltimore auction event will feature a special session of colonial, early American and state issues to be offered as part of the annual meeting of the Colonial Coin Collectors Club, or C-4, as it is popularly known to its members. After well over a decade of meeting in Boston at the November Bay State Coin Show, C-4 has coupled with Stack’s Bowers and will now hold their annual November auction in Baltimore to maximize the event through the partnership. We predict an unusually high turn-out at the auction as an incredible array of Colonial-era coins and currency, some rare, others more common but nonetheless impressive, cross the auction block. We hope to see you there!