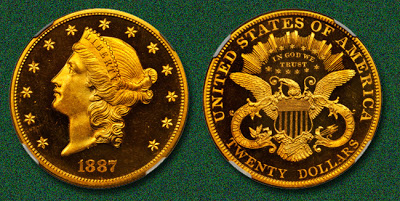 by John Salyer
United States Coin of the Week
Among the most noteworthy offerings in Stack’s Bowers Galleries’ upcoming official auction of the November 2012 Whitman Coin & Collectibles Baltimore Expo is a rare and lovely 1887 Proof Liberty double eagle. Certified Proof-66 Ultra Cameo by NGC, this coin will appear in our eagerly anticipated Rarities Night event as lot 3314.

This important rarity is one of the two highest-graded examples of the issue with a Deep or Ultra Cameo designation listed at PCGS and NGC. The devices are boldly frosted, which helps to produce the bright yellow gold hues that contrast with the reflectivity in the mirrored fields. Close study finds virtually no signs of handling, as one should expect at the premium Gem grade level. Die diagnostics include extremely faint raised die lines (as struck), one below Liberty’s eye, another behind the eye, and a third to the upper left side of the letter Y in LIBERTY. On the reverse, a small raised dot (possibly die rust) is on the center of the post of the letter D in GOD. Walter Breen (1988) mentions the polished area at the top right of the eagle’s tail feathers near the arrows — which is seen here — and the petal of the fleur-de-lis below the eagle’s beak is disconnected, again from overzealous die polishing to obtain maximum reflectivity in the fields. There is remarkable orange-peel texture to the finish, induced by a process at the Mint that formed this unique texture to the highly reflective mirror surface.

The recorded mintage of 121 pieces for the Proof 1887 Liberty double eagle seems too high, as PCGS estimates that between 25 and 30 are known today, a figure which is borne out by certified population data at both PCGS and NGC, which tally a combined 30 pieces (with likely duplication in those modest numbers). What happened to the other 91 or so pieces struck in Proof? Circulated pieces or those impaired by handling are limited to perhaps a couple of coins, and would retain their mirror fields even after moderate circulation. Were these melted? Perhaps we’ll never know. Of the tiny group of approximately 30 survivors, it is indeed a pleasure to offer what is certainly one of the finest known examples of a rare and eagerly sought Proof-only issue in the Liberty double eagle series.