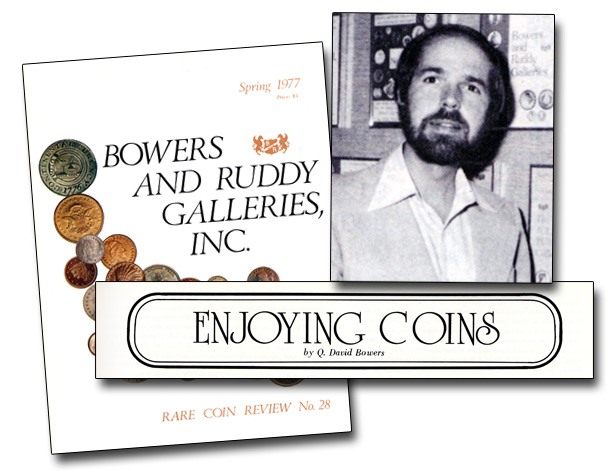 There are several ways to enjoy a numismatic item. First of all, there is the coin itself, the touch or feel of it, the sensation of holding history in your hand, so to speak. Its absolutely fascinating to think that an ancient copper coin might have been held in Julius Caesar’s hand 2,000 years ago, or that a worn 1859 Indian cent could have been in the pocket of one of the combatants at the battle of Gettysburg in the Civil War. The possibilities are endless.

Perhaps the design of a coin might be interesting to you and spark enjoyable fantasies or recollections. For example, often when I see a Standing Liberty quarter dollar of the 1916-1930 era, the Roaring Twenties and all of the nostalgia associated with it come to mind. While I wasn’t living in the Roaring Twenties and, in fact, hadn’t even been thought of then, I’ve read enough history on the era to appreciate it, at least vicariously. How romantic seem the flapper girls, colorful nickelodeon pianos with illuminated art glass fronts, Laurel and Hardy movies, fancy Duesenberg cars which had STOP brilliantly illuminated in red on the back of the car each time the brake pedal was depressed, Henry Ford’s omnipresent Tin Lizzies, the great Florida land boom, all of the excitement about the stock market, and how fortunes were made by newsboys on the street corner, and maybe even F. Scott Fitzgerald’s Great Gatsby.

A coin bearing a tiny S mintmark denoting that it was made in San Francisco in the 1850s, makes one think of the Gold Rush. Those were wild and wooly days in San Francisco and in other parts of California. I also think of novelist Bret Harte’s engaging stories and remember that he was an employee in the late 1850s at the San Francisco Mint, before he achieved writing fame. Coming to mind also are the romantic towns, still intact in many instances, in the Mother Lode country in California’s Mokelumne Hill, Jackson, Sutter Creek, Angels Camp, Placerville (formerly called Hangtown from the method of fast justice there), and so on.

A coin from Carson City evokes thoughts of this mint high in the Comstock Lode country with rip-roaring Virginia City and all of its Victorian buildings nearby. All the reckless and courageous events of the Wild West once occurred there and a visitor to Carson City and Virginia City today can almost relive them.

A coin of the New Orleans Mint reminds us that this mint was established in 1838 during a time when the course of the nation was going westward, and New Orleans was a gateway to the vast areas opened up by the earlier Louisiana Purchase. In 1861 this southern mint was captured by Confederate forces. In later years it returned to U.S. government control, and produced coins through 1909.

A second aspect of enjoyment is what the coin can do for you. Mainly this is an area concerned with investment performance. With investment, however, some patience is needed. Buy coins today and sell them tomorrow and you are making profit only for the dealer. Yet, historically, if you have purchased coins carefully and held them for five to 10 years, or more, then you have done very well. Spectacular performances are the rule, not the exception! In over 20 years in the rare coin business, I have helped build fortunes for many collectors and investors. Few experiences are as rewarding as helping to make someone else rich, and this has been my pleasure time and time again.

Coins can be enjoyed for their relaxation value as well. I have spent many nights curled up on the overstuffed brown sofa in the library of my home, with an interesting numismatic book or publication in my hands. It is amazing how many fascinating tales can be found in numismatic books and in back issues of numismatic periodicals. Once I spent nearly a year of my spare time reading back issues of the American Journal of Numismatics from 1865 up through the early 20th century and back issues of The Numismatist from the early 1890s up to the present time.

An album full of coins and a shelf full of coin books can combine to take you far, far away from the cares and concerns of your office, factory, or store. It is a well-known fact that youngsters with strong interests and hobbies such as coin collecting stay out of trouble much more than their non-hobbyist counterparts. The other day in Antiquarian Bookman, the weekly journal of the out of print book trade, I saw mention of a study that dedicated book collectors and dealers apparently have a sharply lower suicide rate than the general public. I suspect that the same is true of dedicated coin collectors. The relaxation value of a coin collection can be very therapeutic.

Take the time to enjoy your collection, to become aware of its history, and to reflect on its investment potential with age. And take time to emphasize the positive aspects of coins and numismatics. We have a really great hobby, filled with interesting publications, people, organizations and possibilities. As a numismatist you are a part of numismatics, so spread your enthusiasm and let others join in this pleasurable pastime.