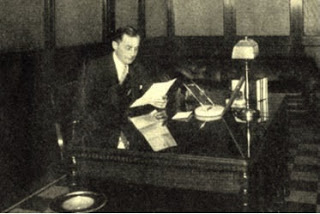 by Stack's Bowers Galleries
Crossing the Block
Stack’s Bowers Galleries will be featuring The Guttag Family Collection, Part III in the Official Auction of the Whitman Coin and Collectibles Expo this November 14-19 in Baltimore Maryland.
During the 1920’s 1930’s there were few names in the numismatic world as well known as Henry and Julius Guttag, prominent New York City numismatists and securities dealers. The brothers were the owners of Guttag Brothers, with offices on Wall Street and Stone Street in lower Manhattan. Their first numismatic ads in 1920 offered to buy 100 Isabella quarters for $45 and announced that, “We are quantity dealers.”

Julius Guttag had become a coin collector at 15 and remained deeply involved in the field right down to his death in 1962. He was Life Member 24 of the American Numismatic Association (ANA). In 1924 he became the chief proponent of Coin Week that soon expanded into a nationwide annual event directed by the ANA that later became known as National Coin Week.

Henry took a less active public role in numismatics but shared his brother’s belief in finding and sharing knowledge, beginning in 1921 with the release of their premium catalog, Rare Coins of the United States, a 122-page guide that competed with B. Max Mehl’s successful Star Rare Coin Encyclopedia and several other widely distributed dealer price guides. In 1924 they published a reprint of Lyman H. Low’s 1899 title, Hard Times Tokens.
In 1924, in the flood tide of national and personal prosperity, the brothers published with Pennsylvania’s Dr. George Hetrich the first edition of their epic Civil War Tokens and Tradesmen’s Cards. This work listed 6,000 varieties of Civil War-era store cards, 600 Patriotic tokens and presented 16 plates. Guttag-Hetrich remained the most widely used guide to Civil War material until the 1960’s.
Next came a contribution to U.S. Colonial numismatic literature, the 1925 20-page guide illustrated with line drawings, New Jersey Cents. Probably the most ambitious Guttag effort was the 1927 Coins of the Americas, Part I, devoted to U.S. coins and Part II, Mexico, Central and South America and West Indies. Hard cover copies of this title are still to be found in use today.
On October 21-22, 1927, the Guttag firm announced its only numismatic auction, with its Catalogue of Auction Sale of Rare and Valuable Coins to be held at the offices of Guttag Brothers. During the 1920’s the firm ran its institutional ads on the back cover of every issue of The Numismatist, journal of the ANA. The world of the Guttags and millions of other Americans came crashing down in October 1929 with the catastrophic stock market crash that annihilated Coolidge Prosperity, the Big Bull Market and President Herbert Hoover’s confident assertion that the United States was within sight of banishing poverty forever.
In December 1929 the last Guttag Coin Bulletin was mailed and all coin advertising ceased. The brothers reportedly lost more than $9 million in The Crash but apparently fell back on their coin collections for support. They were not broke and when in early 1935, the city of Hudson, N.Y. prepared to celebrate its Sesquicentennial with an issue of 10,000 silver commemorative half dollars designed by Chester Beach, Julius Guttag played a large role in this coin’s distribution.
The Hudson coins were to go on sale on June 28, but by July 2 it was announced that the entire
issue was sold out. What was not announced was that the issue had in fact been “distributed” almost entirely to Hudson Mayor Frank Wise and Julius Guttag. The New York dealer paid 90 cents per coin, and was able to promptly sell them for $4 and $5 each.
The name Guttag was later associated with the then fashionable Westchester suburb of New Rochelle and distribution of the 1938 New Rochelle half dollar. Another commemorative coin profiteer, L.W. Hoffecker of El Paso, Texas, told a Congressional investigating committee that the Hudson coin was called the “Guttag half Dollar,” by fellow dealers after Julius Guttag’s commanding position at the coin’s release. The Guttag family was also a factor in several other commemorative issues, notably among the many coins that appeared during the busy year 1936.
Less costly today are several types of Guttag medals that remind the world of the firm’s existence. Designed by Jonathan M. Swanson, the 30 millimeter pieces honored coin and stamp collecting, young numismatists, Coin Week, Washington and Lincoln while advertising the firm’s various specialties, including coins, stocks, bonds and foreign money. B. Max Mehl brought radio to coin collecting in Fort Worth, Texas, and the Guttags brought it to public radio through broadcasts on the popular station WOR.
Many Guttag coins were sold after 1940 through the youthful, hard-driving Abe Kosoff, who also sold the Guttag library, cataloging the books with vast effort and time with decidedly limited profit. During these years, the Guttag Civil War token collection was sold to oldline Maryland dealer John Zug, better known for his handling of gold coins.
Advertising this collection for sale, Zug noted that it contained 5,600 varieties including 80 silver, 100 gilt, 890 brass, 220 white metal, 190 copper-nickel, 210 nickel or German silver, 120 zinc and 30 lead. The balance was composed of copper or bronze tokens. This historic collection was housed in 15 National coin albums. The Guttag brothers accomplished much and overcame many setbacks in their long careers, giving coins associated with their names a special cachet.