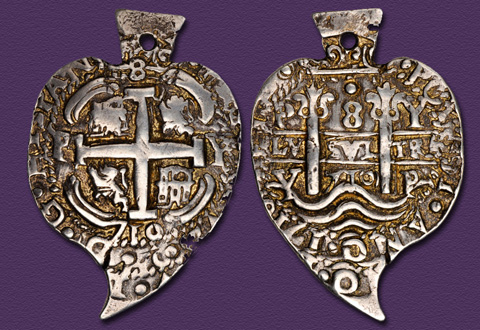 by Kent Ponterio & Chris Chatigny
World Coin of the Week
There seems to be no shortage of incredible highlights for our approaching Stack’s Bowers and Ponterio January New York International coin show and auction. To date we have featured the Pattern Grano and Half Grano, and the unique 1755 Nuevo Reino “Milled” 8 Escudos. To continue our streak of amazing Spanish Colonial rarities, this week we preview a coin which may not visually conform to a coin’s standard dimensions, but nonetheless stands as a true numismatic rarity.

This extremely rare piece has a slightly mysterious background, as its exact purpose is uncertain. One predominant theory is that since the heart shape is similar to “The Most Sacred Heart of Jesus” or simply “Sacred Heart,” they could have been created for special religious purposes. As the religious demographic of Latin America is predominantly Roman Catholic, it seems to be indicative of their religious nature. Regardless of their true purpose, these extraordinary “Heart”-shaped pieces were carefully crafted with special planchets and were carefully aligned to give the piece a medallic die axis. In addition to this special preparation, they are nearly always found pierced for suspension and are often gilt to be worn on display.

The obverse (cross side) prominently displays the Cross of Jerusalem, with the castles and lions of Castille and Leon in the quadrants. The “8” above the cross represents the denomination of 8 Reales, and the first of three full dates “710” is visible below the cross. A good-sized portion of the legend “D.G. HISPAN” is visible. The mintmark “P” for Potosi is to the left of the cross, while the assayer’s mark “Y” is shown at the right. The reverse (pillar side) contains the Pillars of Hercules, located at the Straits of Gibraltar, indicating the gateway out of the Mediterranean and into the Atlantic. The center Latin legend “PLVS VLTRA” means ‘more beyond’ and most likely refers to the vast uncharted territory beyond the Pillars which the Spanish explored and colonized. The “P” mintmark appears in the upper left and lower right, and the “Y” assayer’s mark appears in the lower left and upper right. The “8” denomination appears in the area above the central legend, with a “710” representing the date below. Waves are represented underneath the Pillars as well. A large portion of the outer legend appears on this side, including the date in the seven o’clock region. Overall this is a well-struck example with near full legends, three full dates and three clear assayer’s letters. A hint of contemporary gilding is still present in the protected areas giving the piece a lovely marigold tone. This extremely attractive piece is sure to greatly enhance its new owner’s cabinet. We here at Stack’s Bowers are only aware of one other example of a 1710 “Heart” 8 Reales piece, which was lot #193 in our Sale #42 of the 1990 Paul Karon Collection.

Preview this impressive coin along with the rest of our New York International auction this December at the Stack’s Bowers and Ponterio office located in Irvine, California. For details please refer to the Auction Schedule/Details link under Current Auctions at www.StacksBowers.com. To schedule an appointment, please call 800.566.2580. While our Stack’s Bowers and Ponterio January New York International sale is closed for further consignments, we are currently taking consignments of world and ancient coins for our April 2014 Hong Kong and August ANA sales. If you are interested in consigning your coins and paper currency (whether a whole collection or a single rarity) be sure to contact one of our consignment directors.