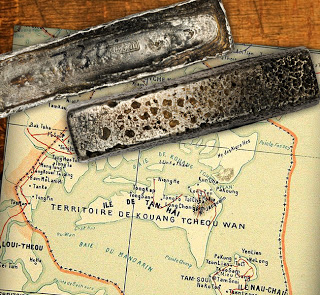 by Todd McKenna
World Coin of the Week
My selection for this week’s spotlight piece from Stack’s Bowers & Ponterio’s upcoming August Hong Kong sale (Aug. 19-22) was at first glance just another silver ingot, but after some translation and a bit of research it told a very interesting story. An unassuming looking piece, the only thing which made it stand out from normal 10 Lang Annamese bullion bars was its size, being about twice as large. What truly piqued my interest in the bar were the air pockets creeping across the base and slightly up the sides, something not seen on bars from Annam or Burma. This is an element typical to the manufacture of Chinese sycee ingots, created by having a small bit of water in the mold before pouring the molten silver which causes steam to be trapped under the metal and form this honeycomb effect. The ingot also lacks any of the normal markings for these types of bars, bearing no official statement of purity, weight standard or denomination. Our only clue in unraveling the piece’s origin was a single stamp on the crudely set face of the ingot. With the help of one of our colleagues the stamp was determined to name a location, Guangzhou Bay. After learning the historical significance of this little known French enclave in China the style and makeup of this ingot began to make sense.

Guangzhou Bay, now known as the port of Zhanjiang, is located in southern Kwangtung province about 150 miles from the northern border of Vietnam. The area was leased to France by the Qing Imperial government at the end of the nineteenth century in an effort to curb the growing power of the foreign controlled ports of Hong Kong and Macau. Despite having natural defenses and an established harbor however Guangzhou was largely ignored by the French as the majority of their interests and resources in the region were poured into the governing of French Indo-China. To this end the population in the port remained almost exclusively Chinese with only 300 Europeans living there out of a population of more than 200,000 by 1931. Without proper administration from the French and a large local population no longer under Qing rule the bay became a haven for smugglers bringing, amongst other things, opium up from French Indo-China to the southern China coast.

With this storied past in mind I believe that this ingot was cast in China using local methods but intended to be taken down the coast to French Indo-China where it could be used to purchase contraband and would easily circulate amongst the indigenous bullion bars. This of course is only a theory, but given the evident age of the ingot, the Chinese style of manufacture for an Annamese shape and the lack of stamps except the one placing it at Guangzhou Bay it does not seem too farfetched. Out of an excellent assortment of sycee we bring to auction this August this piece stood out to me as something truly out of the ordinary. Certainly there are more attention grabbing ingots in this sale based simply on their size and shape but I find this to be one with an absolutely fascinating story which illuminates a corner of history unknown to most. Catalogs for the Stack’s Bowers & Ponterio August Hong Kong sale will be coming online and mailing out soon so be sure to look for this and other intriguing pieces as we bring to auction one of our most diverse sales to date.