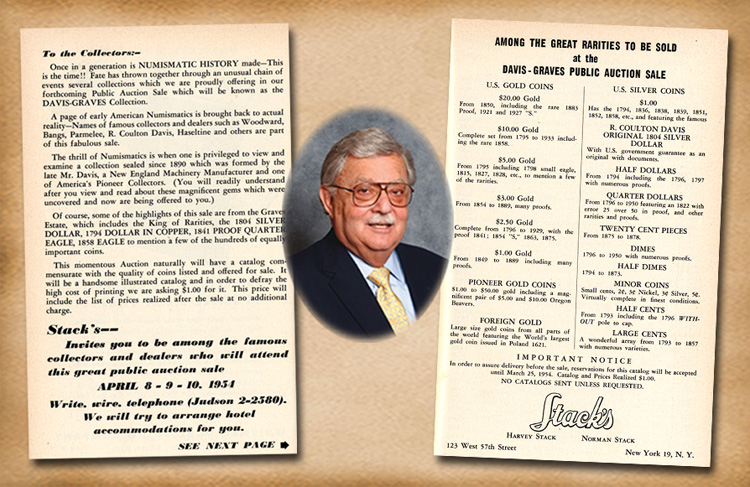 As noted in early stories about the 1954 auction sales of large cents from the Davis Graves and Anderson Dupont collections, much excitement occurred in the collecting world at the news of these two collections.

The first sale, the David Graves Collection, took place in April 1954. Even before the catalogs were issued, large cent collectors were calling to schedule times to visit our offices for private or semi-private showings. We accommodated as many as we could and of course we offered long viewing for those who came to New York from all over to examine and make notes on the coins. Dr. Sheldon let the large cent community know what he was working on and helped attract interest that way. He had a group of collectors who were figuring out among themselves how the coins could be split between them, including pieces that Dr. Sheldon wanted for himself.

The afternoon before the sale began, while coin viewing was still going on, a charming lady came into the exhibit room and went to register to bid. She spoke to our head office manager, at the time Rose Zelman, who had been with Stack’s for close to a decade. At the time we used bidders’ initials instead of bidder numbers, as it was easier for the auctioneer to identify the bidder. The lady identified herself to Rose as Dora Nelson and Rose assigned her the bidder ID of DN. Since we did not know her, she gave us a substantial deposit against the bids she might make. She then went into the exhibit area to review the lots. Before the end of the day, Rose introduced her to me and I introduced her to my father and my uncle.

The next day, about 15 minutes before the start of the auction, DN came into the auction room and sat down on the right side, near the side door. She opened her catalog and waited patiently for the sale to begin. I went over to greet her and offer any help she might need. She smiled and said nicely, “Harvey, this is not the first sale I have ever attended.” I thanked her again for coming and went to my position at the auction block.

The room was filled with 200+ collectors, dealers and agents. Having looked at the mail order bid book earlier in the day, there were enough substantial bids received that the sale was already a success. As an auctioneer, the level of competition is important — the more there is, the more items sell for.

As the first lot opened, the bidding was room-wide, strong not only from the “Dr. Sheldon” group, but also from all over. As the bidding slowed, all of a sudden DN raised her pen and bid, which she continued to do until she won the lot. All eyes turned her way, and you could hear the murmur of people wondering, “Who is that lady?” As often happens, applause broke out and then the sale continued. As old timers may remember, one rarely saw a woman bidding in the auction room for copper coins, with the exception of Emery May Norweb or Dorothy Pascal.

And DN continued to bid — the rarer the lot, the choicer the coin the more actively she bid. When not bidding, she waited in her seat and recorded the prices as the sale continued. Everyone was amazed at what she bought and how she cleverly outbid the competition, including dropping out of the bidding when the price became too high. Although it was completely improper, as certain dealers left the room they managed to drop their business cards in her lap. She politely picked them up, but after the sale threw them in a waste paper can.

After the sale concluded, she went over to Rose Zelman, asked for her bill and reviewed it. She asked if she could come in and see Rose in the morning about the balance. She thanked us, said goodbye and left. The next morning she came to the shop, checked out her lots, paid Rose the amount due and said, “Thank you and have a good day.”

Later I was able to contact her and did represent her at convention auctions. But she reappeared personally in the Stack’s auction room at the Anderson Dupont Collection sale in September, later that same year.