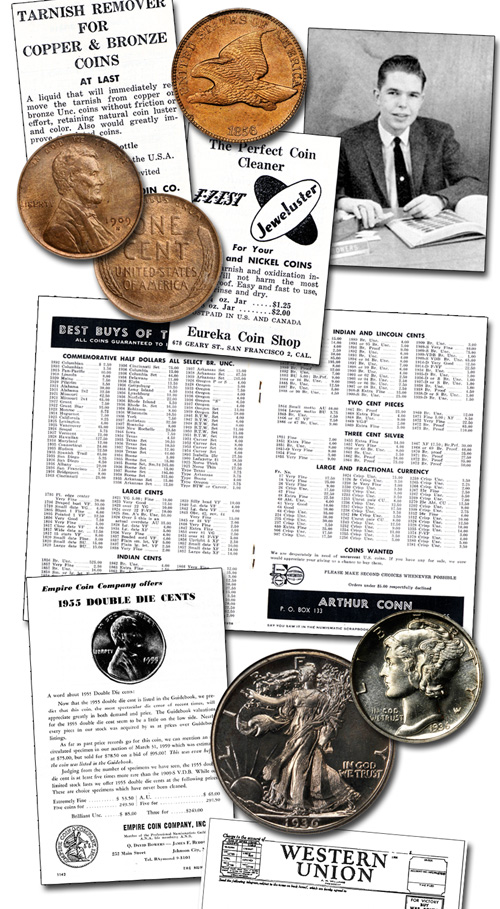 by Stack's Bowers Galleries
Answers for the Avid Collector
Question: This question is for Q. David Bowers: What is the coin business like today compared to when you first entered the hobby in 1952? – B. K.

Answer: Thank you B. K. for your question. I have been asked to compare numismatics today in 2013 to what it was when I first entered the hobby as a young teenager in 1952, transitioning to become a part-time dealer in 1953. I have written similar commentaries and it is always fun to do.

In the early 1950s numismatics was a very exciting hobby, just as it is today. Those involved were very enthusiastic, the future seemed bright, and building a fine collection was considered to be an excellent store of value. At the same time, it was a challenge to assemble a nice set or display, much more than today.

On the plus side, there were many treasures to be found in circulation, or at least there was that potential. Everyone hoped to find a 1909-S V.D.B. Lincoln cent. Few did, but Lincoln cents were available in circulation dating back to the first year of issue, 1909, and there was always the hope. The 1914-D was another key. A few years later when my business expanded and I began advertising, it was always the policy not to list 1909-S V.D.B. cents, as these would be the first ordered and I would run out quickly. This particular issue was far and away the most desired of all American coins.

Of course, classic rarities were in demand as well. I recall that in 1954 I needed an 1856 Flying Eagle cent for a customer and called Harvey Stack in New York City. He had one for sale but apologetically said that he had to all of $310 for it, as an example had just brought that price or close to it at auction. The first coin I ever bought through the mail was a bit before then, from the Copley Coin Company in Boston, a Superb Gem 1859 Indian cent for $11. Although these prices seem impossibly cheap today, other things were also much less expensive. When I was in college some years later I often went to New York City to attend sales held by Stack’s. I stayed in the Park Sheraton Hotel (today’s Park Central) on 6th Avenue, the rate being $16 per night. In 1957 I was a guest on the Today Show at NBC. The network paid my way to New York City and put me up at the Waldorf Astoria for three nights, a nice experience. I invited Walter Breen for lunch and the tab came to an amazing $17 — almost unbelievable.

Of course, comparisons are endless and inflation has raised the price of just about everything. The first car I bought with my own money was a Cadillac Coupe de Ville convertible, list price $6,000 in 1960. Today one would be hard pressed to buy a decent motorcycle for the same figure.

Changing the drift somewhat, to be a successful young dealer I had to have my wits about me. It was common for other dealers to offer “Proofs” that were buffed Uncirculated coins. Or, in some instances, chrome plated. One popular trick was to take genuine Proof cents and nickels of 1936 and put them in a plastic holder with the dime, quarter, and half dollar chrome plated, then offering the group as a “Proof set.” John J. Ford, Jr., commented some years later in the 1960s if I recall correctly, that he went to a leading convention and over half of the “1916-D” dimes were fakes — with added mintmarks. Accordingly, early on I had to learn to tell the genuine from the false, to detect added mintmarks, to determine when coins had been “improved” or altered and the like. Years later when the American Numismatic Association Certification Service was founded in the 1970s, I became a consultant to them on matters of authenticity.

Grading was another challenge as there were no standards at all. Coins were generally called by names we know today — Good, Fine, Very Fine, Extremely Fine, About Uncirculated, and Uncirculated. The term Mint State, although it had been used generations earlier, was hardly ever used but did appear in Dr. William H. Sheldon’s 1949 book, Early American Cents, and was used by specialists in copper. A coin had to be brilliant or it wouldn’t sell. Uncirculated coins were commonly described as “BU” or Brilliant Uncirculated. The vast majority of collectors viewed toning as tarnish or corrosion. To keep coins bright, the numismatic publications offered potions, lotions, and other substances. Coins were dipped and brightened, then would tone again, then would be dipped by another owner, and so it went. The result was that many Proofs were dipped so many times that they became rather dull.

There were exceptions, of course, and some connoisseurs preferred toned coins and wouldn’t consider dipping them — Emery May Holden Norweb being an example. John J. Ford, Jr. and Walter Breen at the New Netherlands Coin Company in the 1950s also admired coins and made an effort to describe those that were visually appealing. There were certain classes of coins that were never cleaned such as colonials. However, to be generally saleable a silver coin had to be bright. With regard to degrees of wear, that came with experience. My policy was to deliver to customers more than they expected. Because of this, in general my “BU” quality was better on average than could be found nearly anywhere else. This built a great deal of customer loyalty. Within the Brilliant Uncirculated category there were no gradations, although occasionally something would be called choice or gem.

One of my favorite memories is visiting Arthur Conn, who conducted a coin business from his home in Melrose, Massachusetts, and ran double-spread advertisements in the centerfold of The Numismatic Scrapbook Magazine each month. Commemoratives were one of his specialties and in going through his stock I cherrypicked pieces that were gems. In his box of 1900 Lafayette commemorative dollars were dozens of pieces marked BU, some of which I considered to have light wear, others to be superb gems, but all at the same price. I picked out the nice ones.

Transportation back then was by coin or train for short or medium distances — not much different from today — and by air for longer journeys. The Lockheed Constellation and DC-6 were classics on long routes. These planes flew at much lower altitudes than do today’s jets, with the result that in crossing the country the pilot often had to turn left or right to dodge cumulus clouds.

Communications were nearly always by letter. There were telephone connections, of course, but long-distance rates were expensive and, in any event, calls had to be placed by calling through an operator or two, which sometimes took time. For urgent messages or one for which a record was required, a Western Union telegram would serve to confirm a bid, to quote a customer who was in a hurry, or whatever. The Xerox machine had not been invented, there were no faxes and, of course, no personal computers. When I graduated from the Pennsylvania State University in 1960 with a degree in finance, I had no information at all about computers. The university did have one, a huge device housed in two rooms and generating a lot of heat, which turned out punched IBM cards. However, they had nothing to do with regular businesses at the time and there was no need to learn about them.

Because of the preceding, if you had been a collector in the 1950s, in order to buy coins effectively you would have to gain quite a bit of experience by attending coin shows, visiting dealers, and comparing lots of pieces. Still, you were apt to get trapped if you dealt with the wrong people.

What to say about today in 2013? Not much, as space is at a premium. However, with certification by leading services and with so much price information available, it is possible to become an instant collector, so to speak. Somebody can learn about coins on Wednesday and on Thursday buy thousands of dollars worth of Morgan silver dollars, Liberty Head double eagles, certified, and with an eye on price charts do fairly well. Gone, however, is the spirit of the chase. I find that to be a missing element. As has been said by many people, it is interesting to have a challenge when forming a collection.

Today more than just a few people have moved away from the popular federal series after having built fine collections and have gone to other areas in which there are few if any grading standards, little in the way of standard prices and the like. Such fields generally include tokens, medals, colonial coins, obsolete bank notes, and others. Interestingly all of these fields are among the most active, the most dynamic in numismatics today. However, there is still something nice to be said about the opportunity to buy a romantic Carson City Morgan dollar in Choice or Gem Mint State for just a few hundred dollars. Numismatics certainly is diverse, something for everyone.