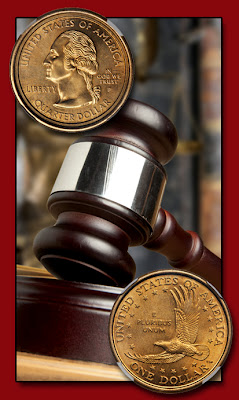 by Frank Van Valen
United States Coin of the Week
A rare Sacagawea golden mini-dollar “mule” that couples the reverse of a Sacagawea dollar coin with the George Washington obverse of a Statehood quarter will hit the auction block at our Official August 2012 ANA World’s Fair of Money Auction in Philadelphia. This rarity is from 2000, the first year of the Sacagawea mini-dollar, though no date is present on either side. Bowers and Merena had the honor of auctioning the very first of about a dozen examples currently known of this rare muling back in August 2000 at the ANA Millennium Sale, also in Philadelphia, where it brought an astonishing $29,900 when the ensuing bidding war was done. Not bad for an error coin!

This remarkable muling was first brought to the attention of the collecting community in May 2000 when Frank Wallis of Mountain Home, Arkansas reported the first known example. At the time certain other rare mules such as a dime obverse-cent reverse and another with a cent obverse-dime reverse were reported, but the Sacagawea mini-dollar reverse coupled with the Washington State quarter obverse error was the one picked up by reporters, receiving coverage in the numismatic press as well as local and national newspapers and on television news. The search was on, and by late 2000 several other examples had come to light. Amazingly, three different die pairings were defined by numismatic author and researcher David Camire, who was the first to authenticate the muling. After further research, the U.S. Mint acknowledged the error, saying in part “In its 208-year history, coin errors are a rare occurrence, but occasionally, misstrikes happen.”

In the fine 2010 numismatic reference 100 Greatest U.S. Error Coins (Whitman Publishing, LLC, 2010) by authors Nick Brown, David Camire, and Fred Weinberg, all recognized experts in the field of error coinage, a roster of 10 different examples of the Sacagawea dollar / Washington quarter muling was enumerated. Indeed, this rare error is listed in the above reference as Coin # 1 out of the 100 error coins listed! At the time of publication of the reference, collector Tommy Bolack owned eight different examples of the error, including the discovery piece sold by us in 2000 – his mini-hoard includes four pieces from Die Pair 1, three from Die Pair 2, and one piece from Die Pair 3. The other two listed specimens were in private collections at the time of publication.

As noted by our ANA sale cataloger: “The present opportunity represents a seldom-offered scenario in which a greatly prized and equally elusive rarity is offered to the general public by way of auction. As with all other examples sold of this rare Sacagawea mini-dollar / Washington Statehood quarter mule, either publicly or through private treaty, there will be no room for bargain hunters – they will fall quickly by the wayside as the serious players take heavy pursuit of this rare and desirable prize.

We sincerely hope you have an opportunity to examine – and enjoy – this rare “$1.25 face value” piece of numismatic history at one of our upcoming lot viewing venues in Irvine, California, New York City, or in the City of Brotherly Love, Philadelphia, during the most exciting week of the year, ANA Convention week!