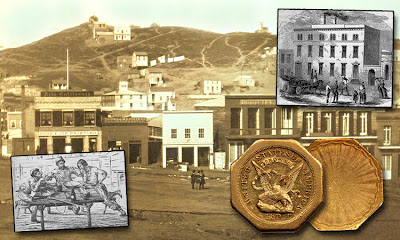 by James Matthews
United States Coin of the Week
Among the many important highlights from our recent March Baltimore Auction that I had the privilege of cataloging is lot 4235, the beautiful 1851 Augustus Humbert $50 gold of the Lettered Edge, 50 D C, 880 Thous, No 50 on Reverse variety certified AU-55 by PCGS. The coin saw spirited bidding and, when the gavel finally fell, achieved an impressive prices realized of $138,000.

This is a simply splendid coin that boasts nearly full radiant luster, blazing orange-yellow gold surfaces and strong eye appeal. The strike is sharp throughout, particularly on the eagle’s wings and the exquisite engine turned reverse design. Minor nicks and bumps are present, including a few at the corners, although the overall coin shows comparatively minor marks as these huge “slugs” are often found with heavy dents and other sizeable abrasions due to heavy commercial use. Such stellar quality is a feast for the numismatic eye, and this prized relic of California’s famed Gold Rush era is seldom offered in such wholesome condition, as well as in a technically high grade such as AU-55.

Augustus Humbert arrived in San Francisco on January 30, 1851 to serve as U.S. assayer of gold, and coinage began the next day as reported in Pacific News, which carried a line drawing of his new $50 pieces. The base of the obverse contained a capital D and C for dollars and cents, to be filled in by the coiner. These $50 coins formed the backbone of commercial commerce for the first five years of the Gold Rush and memorialize this important moment in our nation’s history.

The original design of this famous $50 gold piece is likely that of famed medalist Charles Cushing Wright, as a letter in the National Archives from him depicts a line drawing of this octagonal coin. The legend UNITED STATES OF AMERICA was to surround the eagle. The eagle’s posture was to be one of defiance with the United States shield (representing the Constitution) resting upon a rock. The eagle’s claws clutch both the olive branch of peace and the arrows for preparedness for war. On the reverse the turned engine design of web-like engraving was believed to be virtually impossible to reproduce as the complexity of the machinery required to create this die was limited to a single machine known in the United States at that time. After all the trials and tribulations of the private gold coiners of this initial period, stability and a virtually impossible to counterfeit coin as produced by the United States Assay Office in San Francisco would bring welcome relief.

Confirming the urgency to have the Assay Office established in San Francisco, a letter dated November 20, 1850 from then Senator of California William M. Gwin to Treasury Secretary Thomas Corwin stated that some $4 million (250,000 ounces) worth of gold per month was coming from the California gold fields, about half of which was sent abroad at an ongoing loss to the proposed Assay Office of $2 per ounce. Once the Assay Office was established, gold would be purchased and coined at a value of $18 per ounce given the normal purity of gold coming from that region with refining and smelting costs. Having the established official Assay Office brought a more even hand to the treatment of all gold coming in from the surrounding areas, although a true branch mint would not be established in San Francisco until 1854. This interim period continues to be one of the most storied, studied and collected areas of American numismatics.