A Question About Auction 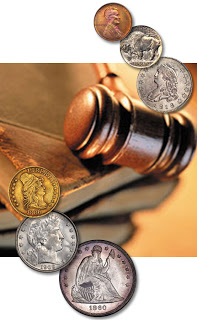 by Q. David Bowers
Answers for the Avid Collector
A Question about Auctions
In looking through some files we came across this inquiry addressed some time ago to our own Dave Bowers—and the answer he gave:

Question: Dear Dave” I want to thank you very much for your weekly column "The Joys of Collecting" in Coin World. I look forward to reading it every week.
I am wondering if one of your future topics for your column might discuss the numismatic origins and history of the 15% buyer’s fees we normally all have to pay when purchasing coins for our collections. If you could also include your opinion on the pros and cons of the buyer’s fee and discuss the relevancy of this fee in today’s market that would be very nice.
I really do not enjoy having to pay a buyer’s fee, mainly because I do not understand it and wonder why the seller doesn’t just mark up the purchase price. Being a novice collector, I really appreciate all the knowledge that you provide us each week. It has been very helpful to me and helps make collecting coins fun.
Again, thank you for your column and all it provides to those of us who read Coin World. Keep up the outstanding work you do. — Sincerely, J.W.E.
Answer: Dear John The idea of a buyer’s fee for auctions was widely used in the art and antiques field by the time it took hold in numismatics, circa 1982. In its most familiar form today the fee is applied to the hammer price. If an auctioneer sells a lot for $1,000, on the invoice 15% is added, making the total price $1,150.
The 15% is by no means consistent. Some auction houses charge no fee at all, others 10%, and in certain areas of art and antiques, the fee is higher than 15% on lower value items, and is reduced on items of especially high value.
The idea originated in numismatics with the thought that consignors often resented paying a typical reasonable commission to have coins, tokens, medals, and paper money auctioned. The standard seller’s commission for items requiring typical cataloguing and the like used to be about 20%. For certain items, such as gold bullion coins, high denomination paper money, and the like, the seller’s commission would be less. For some other series, say certain tokens, medals, scrip, and the like, it would be higher than 20%. All these figures were negotiable.
Although there was really no difference in the amount of money involved, auction houses found that if they charged the consignor nothing at all, but charged the buyer, say 15%, the seller would feel that he or she was having his material auctioned for free. Of course, this was not the case from a logical viewpoint, but it did have appeal. The system caught on, and soon it was widely used.
With regard to you as a bidder, the smart thing to do is to calculate the entire price paid. If $1,150 is the maximum you want to pay for a coin, then you should submit a bid of $1,000 with the thought that if this bid is successful for its full amount, the bill indeed will be $1,150. If you want to pay $1,000, deduct 15%, and bid $850. The math does not work out precisely, for in this instance $850 plus 15% equals $977.50. For a better approximation, deduct 13% from the $1,000 price, yielding $870 hammer price, to which when 15% is added, comes to $1,000.50. Of course, you need a pocket calculator or a computer to figure this out—but it is easy once you set up a system.
Also, be sure to read the fine print. Shipping and handling fees can be relevant on certain lots that have small value. These are not necessarily related to the postage marked on the shipping envelope, as many companies have private insurance and, in any event, handling is not reflected in postage. Some companies have a minimum handling charge for inexpensive lots. In summation, the most important thing is the price you actually pay. Calculate all aspects in advance, including the buyer’s fee, estimated postage and handling charges, and, if relevant, sales tax. Then bid a figure that, when these other charges are added, will approximately equal the amount you wish to pay.
Although this has nothing to do with coin auctions, it is relevant to the fine print—in this instance which I did not read. On e-Bay I bid on an old postcard and won it for $2. I was charged $2 plus $8 for postage. I queried the seller, and he replied, “Postage is how I make my money.”
In a related example, also on e-Bay, a seller advertised something like, “I am not familiar with old paper money, but I have acquired some very nice copies of original sheets of four notes each.…” A bidder thought that “copies” meant “examples,” and offered a strong price. He won, and received the mail some cheap photocopies.
Thanks for writing! I hope this has been of some help.